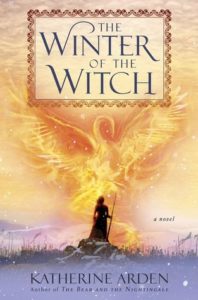 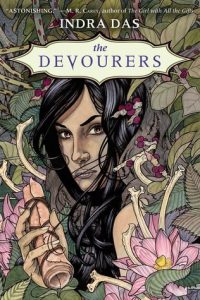 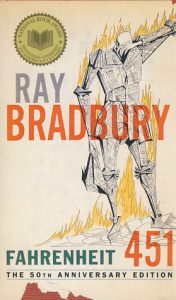 The terrifyingly prophetic novel of a post-literate future.
Guy Montag is a fireman. His job is to burn books, which are forbidden, being the source of all discord and unhappiness. Even so, Montag is unhappy; there is discord in his marriage. Are books hidden in his house? The Mechanical Hound of the Fire Department, armed with a lethal hypodermic, escorted by helicopters, is ready to track down those dissidents who defy society to preserve and read books.
The classic dystopian novel of a post-literate future, Fahrenheit 451 stands alongside Orwell’s 1984 and Huxley’s Brave New World as a prophetic account of Western civilization’s enslavement by the media, drugs and conformity.
Bradbury’s powerful and poetic prose combines with uncanny insight into the potential of technology to create a novel which, decades on from first publication, still has the power to dazzle and shock.

I reread Fahrenheit 451 this year for a discussion with students at my school, and what struck me most this time was the reliance of so many of us on technology and the media that some of us forget (or don’t think) to think about the world around us. Ray Bradbury’s novel deals with the dissolution of literacy and the saturation of media in the future. In the 1950s when it was first published, the novel deals with a future imagined by Bradbury, and through the years, the warnings the novel shows its readers still remain relevant.

I gave a little talk to incoming freshmen about the novel as it was a campus-wide reading requirement for all incoming freshmen, and I spoke a little bit about the Cold War, a little bit about Bradbury writing it, and then I contrasted it with media and literacy today. I talked about how things are different now than they were in the 1950s, especially with the rise of technology, and I compared the walls of TV in the novel to the constant companion of our phone familiars. In Bradbury’s novel, the characters sit in literal rooms of screens and are fed an endless stream of entertainment and information. Today, we sit with phones in our hands and are fed an endless stream of entertainment and information. I asked them to consider where the information is coming from, I asked them to consider a bias, and I asked them to continually seek out answers to any questions they have and to use whatever is available to them to get those answers.

After the election results, I’m astounded at how culturally relevant this book still is. Our society is so dependent upon the media for information and does not seem to value using one’s own mind and abilities to read, to research, to question what’s put before us. Our society has devalued education, and I feel as if so many students are no longer taught how to think but what to think, and this is reflected in the constant, consistent bombardment of information through our televisions, through our computers, and through our phones.

Let this time in America’s history be a reminder to never stop thinking, never stop questioning, because if we stop, we’re going to live in a world in which thinking about ideas rather than merely absorbing them will become a way of the past.