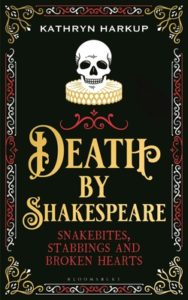 An in-depth look at the science behind the creative methods Shakespeare used to kill off his characters.

In Death By Shakespeare, Kathryn Harkup, best-selling author of A is for Arsenic and expert on the more gruesome side of science, turns her expertise to Shakespeare and the creative methods he used to kill off his characters. Is death by snakebite really as serene as Cleopatra made it seem? How did Juliet appear dead for 72 hours only to be revived in perfect health? Can you really kill someone by pouring poison in their ear? How long would it take before Lady Macbeth died from lack of sleep? Readers will find out exactly how all the iconic death scenes that have thrilled audiences for centuries would play out in real life.

In the Bard's day death was a part of everyday life. Plague, pestilence and public executions were a common occurrence, and the chances of seeing a dead or dying body on the way home from the theater was a fairly likely scenario. Death is one of the major themes that reoccurs constantly throughout Shakespeare's canon, and he certainly didn't shy away from portraying the bloody reality of death on the stage. He didn't have to invent gruesome or novel ways to kill off his characters when everyday experience provided plenty of inspiration.

Shakespeare's era was also a time of huge scientific advance. The human body, its construction and how it was affected by disease came under scrutiny, overturning more than a thousand years of received Greek wisdom, and Shakespeare himself hinted at these new scientific discoveries and medical advances in his writing, such as circulation of the blood and treatments for syphilis.

Shakespeare found 74 different ways to kill off his characters, and audiences today still enjoy the same reactions--shock, sadness, fear--that they did over 400 years ago when these plays were first performed. But how realistic are these deaths, and did Shakespeare have the science to back them up?

I love reading books that provide some kind of external context about other books or works — whether it’s historical context, criticism, and, in the case of Kathryn Harkup’s Death by Shakespeare, scientific context. Death by Shakespeare explores the many deaths in Shakespeare’s plays and provides insightful looks into how contemporaries handled disease and death, and Harkup explores these topics with clarity, empathy, and humor. Shakespeare’s body of work can be daunting and difficult for modern readers, but Harkup presents her research in an engaging way that is entertaining and in reach.

I loved the intersections of contemporary and modern medicine, as well as the examinations of how the deaths in the plays were (or weren’t) performed on stage. Death today seems so far removed from our society, yet in Shakespeare’s day, death was actively part of every day life. This was also something weird to read at this present time with the coronavirus pandemic because I’m confronted by death daily and still so far removed from it because no one I know has contracted it, but Shakespeare and his contemporaries confronted death in all its causes in such close proximity that it was difficult to ignore, even in his own work. The thing I loved most about Death by Shakespeare is the connection of the historical and everyday life with the science because it made everything feel so much more real. Like death, history seems something so far removed from us that we sometimes forget that history is populated by people living lives with emotional scope and depth as people live today, so in a way, putting Shakespeare’s plays into context like, along with any contextual criticism, this brings the humanity of these plays to the surface.

This is something that would be beneficial to anyone reading and studying Shakespeare as it provides an engaging and accessible look into the reasons why Shakespeare likely used certain kinds of poisons, murders, and avenues of death in his work. Personally, I know having this historical/literary/scientific context when I was taking my Shakespeare course in undergrad would have added so much to my enjoyment and understanding of the plays, but I’m glad to have read it now!

Many thanks to Bloomsbury Publishing for sending me an early copy to review! All opinions are my own. 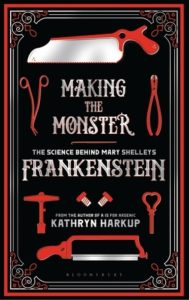 The year 1818 saw the publication of one of the most influential science-fiction stories of all time. Frankenstein: Or, Modern Prometheus by Mary Shelley had a huge impact on gothic horror and science fiction genres. The name Frankenstein has become part of our everyday language, often used in derogatory terms to describe scientists who have overstepped a perceived moral line. But how did a 19-year-old woman with no formal education come up with the idea for an extraordinary novel such as Frankenstein? The period of 1790-1820 saw huge advances in our understanding of electricity and physiology. Sensational science demonstrations caught the imagination of the general public, and newspapers were full of tales of murderers and resurrectionists.

It is unlikely that Frankenstein would have been successful in his attempts to create life back in 1818. However, advances in medical science mean we have overcome many of the stumbling blocks that would have thwarted his ambition. We can resuscitate people using defibrillators, save lives using blood transfusions, and prolong life through organ transplants--these procedures are nowadays considered almost routine. Many of these modern achievements are a direct result of 19th century scientists conducting their gruesome experiments on the dead.

Making the Monster explores the science behind Shelley's book. From tales of reanimated zombie kittens to electrical experiments on human cadavers, Kathryn Harkup examines the science and scientists that influenced Mary Shelley and inspired her most famous creation, Victor Frankenstein. While, thankfully, we are still far from being able to recreate Victor's "creature," scientists have tried to create the building blocks of life, and the dream of creating life-forms from scratch is now tantalizingly close.

Mary Shelley’s Frankenstein is one of my favorite books of all time, and definitely in my list of top ten classics. So when I saw Kathryn Harkup’s Making the Monster beginning to make its rounds on Twitter and Instagram, I added it to my TBR and wishlist and waited for a good sale because based on the cover and title alone, I wanted it for my own collection.

I love literary histories like these that give the reader an insight into the creation of the novel while also providing context for the scientific aspects of Frankenstein. Sometimes I felt that the structure of the book could be better managed, but overall, I thought that the back and forth between Mary Shelley’s life and the real-life science that inspired the science in her novel worked effectively. Harkup’s book is incredibly well researched, and her meticulous attention to detail adds so much to the experience of reading this. For someone like me who isn’t wholly aware of a lot of medical and science history, the chapters focusing on the medical and science history were the most chilling and most engaging, especially the chapter regarding autopsies and the lucrative business surrounding the digging up of cadavers to sell to institutions of higher learning.

The main issue I had with the book were the biographical sections involving Percy and Mary Shelley because a good portion of those sections read as if they had been poorly edited or were a draft that could have easily been tightened up or finished off. I think Harkup’s strengths lie in scientific writing that is readily based upon set-in-stone information, whereas biographies do require a little more finesse in terms of narrative structure. For example, a lot of sentences in the biography sections ended with prepositional phrases and included digits instead of spelled out numerals for numbers under 100. Several sentences contained dangling participles, and I had to reread the sentences several times to be sure what the “it” was in the second half of the sentence. These are my editorial quibbles from my days editing student essays, so my reading experience is jarred when I notice these things in published works.

Overall, the science and medical histories and the biographies in Making the Monster are accessible to a variety of readers, whether or not they are familiar with Shelley’s Frankenstein. If you’re interested in the sometimes gruesome practices in the history of medicine and/or enjoy literary biographies, I recommend checking this one out!