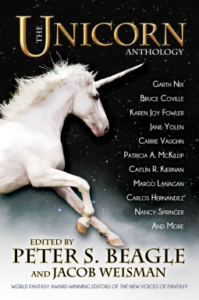 “What a treasure trove!”—Sarah Beth Durst, author of Queen of the Blood

Unicorns: Not just for virgins anymore. Here are sixteen lovely, powerful, intricate, and unexpected unicorn tales from fantasy icons including Garth Nix, Peter S. Beagle, Patricia A. McKillip, Bruce Coville, Carrie Vaughn, and more. In this volume you will find two would-be hunters who enlist an innkeeper to find a priest hiding the secret of the last unicorn. A time traveler tries to corral an unruly mythological beast that might never have existed at all. The lover and ex-boyfriend of a dying woman join forces to find a miraculous remedy in New York City. And a small-town writer of historical romances discovers a sliver of a mysterious horn in a slice of apple pie.

I love unicorns. The mythology surrounding unicorns is so intriguing to me, especially when the traditional concepts of unicorns are broken down, dismantled, and challenged, and the idea of innocence and purity is explored in so many of the stories in this volume. What does it mean, ultimately, to be innocent and pure? How can one take the familiar myths of unicorns and subvert them?

My favorites were “The Maltese Unicorn” by Caitlín R. Kiernan (the lesbian unicorn noir you didn’t know you needed to read until now), “Ghost Town” by Jack C. Haldeman II (brother of Joe Haldeman!, and I also love western-esque stories about rogues being changed by chance encounters in nearly-abandoned towns), “The Highest Justice” by Garth Nix (I love anything Nix writes), “Survivor” by Dave Smeds (a Vietnam soldier gets a unicorn tattooed on his chest and therefore cannot die), “Homeward Bound” by Bruce Coville (he wrote a series of unicorn books for middle grade readers that I thoroughly enjoyed and was happy to see another unicorn story by him!), and “The Transfigured Hart” by Jane Yolen (anything she writes is pure magic and pure joy).

This collection comes with a recommendation from me, especially with the introduction by Peter S. Beagle himself.

This releases April 19, 2019! Thank you to Tachyon Pub and Netgalley for a complimentary copy to read and review. All opinions are my own 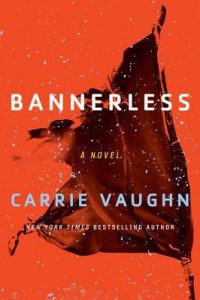 A mysterious murder in a dystopian future leads a novice investigator to question what she’s learned about the foundation of her population-controlled society.

Decades after economic and environmental collapse destroys much of civilization in the United States, the Coast Road region isn’t just surviving but thriving by some accounts, building something new on the ruins of what came before. A culture of population control has developed in which people, organized into households, must earn the children they bear by proving they can take care of them and are awarded symbolic banners to demonstrate this privilege. In the meantime, birth control is mandatory.  Enid of Haven is an Investigator, called on to mediate disputes and examine transgressions against the community. She’s young for the job and hasn't yet handled a serious case. Now, though, a suspicious death requires her attention. The victim was an outcast, but might someone have taken dislike a step further and murdered him?  In a world defined by the disasters that happened a century before, the past is always present. But this investigation may reveal the cracks in Enid’s world and make her question what she really stands for.

What happens when you mix a post-apocalyptic dystopian with a bit of detective fiction? You’ll get Carrie Vaughn’s Bannerless. I really enjoy traditional, structural genre stories mixed with a fantastic setting, and this one didn’t disappoint. Bannerless takes place about a hundred years after a series of events destroy society. It’s a little like taking a peek into our future if we aren’t careful about our relationships with other countries and if we aren’t careful with our planet. Instead of being another post-apocalyptic dystopian novel, Vaughn uses this vision of the future as a twist in her traditional mystery and that twist adds a dimension to the story that I found really enjoyable.

In this futuristic world, the population has dwindled, birth control is mandatory, and people live in tight-knit communities in which everyone knows everyone else’s business. People group together in family units called houses, and they work together to provide enough materials for themselves and for their families, and once their quotas are met or consistently exceeded, these families can apply to get a banner which allows that household to have a baby.

Enid of Haven is an Investigator, a role that combines the roles of police, detective, and judge. Crime doesn’t really exist in this future world, and most of it ends up being bannerless pregnancies or unauthorized food and material production to try to game the system. She is called up with her partner to investigate a suspicious death of a bannerless person in a neighboring community, and she is forced to confront someone with her past as she and her partner Tomas figure out the mystery. I also really enjoyed Enid’s self-discovery as she investigates the suspicious death. She goes from being a little insecure of herself as an individual to growing more and more confident in herself, and to me, that’s entirely relatable. Told in alternating chapters of Enid’s past and present, Bannerless explores a future in which our very society is regulated on the local level and how our actions, even with good intentions, can be devastating for entire families.

If you enjoy traditional mysteries, dystopian futures as imagined in books like Station Eleven, and speculative fiction, you’ll probably enjoy this one! It’s short, yet well-crafted and well-paced. And I’ve just read she’s working on another post-apocalyptic murder mystery, so I’m hoping that the next one will continue following Enid’s investigations!

This book was provided to me for review by Netgalley and Mariner Books. All opinions are my own. 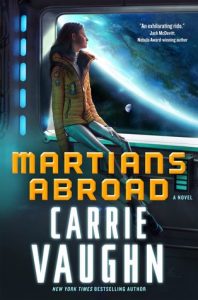 A great new stand-alone science fiction novel from the author of the Kitty Norville series.
Polly Newton has one single-minded dream, to be a starship pilot and travel the galaxy. Her mother, the director of the Mars Colony, derails Polly's plans when she sends Polly and her genius twin brother, Charles, to Galileo Academy on Earth—the one planet Polly has no desire to visit. Ever.
Homesick and cut off from her desired future, Polly cannot seem to fit into the constraints of life on Earth, unlike Charles, who deftly maneuvers around people and sees through their behavior to their true motives. Strange, unexplained, dangerous coincidences centered on their high-profile classmates begin piling up. Charles may be right—there's more going on than would appear, and the stakes are high. With the help of Charles, Polly is determined to find the truth, no matter the cost.

Carrie Vaughn’s Martians Abroad reads like a science fictional school story in which two Martian-human kids are sent to Earth to a prestigious school and things go amok. It’s a well-written, yet straightforwardly simple story following Polly’s mishaps as she attempts to integrate into Earth’s way of things at this boarding school. A set of orchestrated, predictable events prove Polly’s worth to herself, her mother, and the other students as she risks her life to save a handful of the other students. While I was expecting more depth as it was marketed as an “adult” science fiction novel, I think this is a great introduction to science fiction for the younger YA set and a great bridge from children’s fiction to “older” science fiction. The story reads easily, doesn’t feature sex or explicit language, and the violence is on par with most violence found in books marketed to the middle grade and young adult crowd.

Thank you to Netgalley and Tor Books for a review copy! 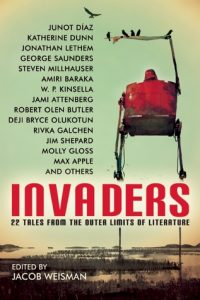 Invaders is a collection of stories written by “literary” writers exploring the concept of invasion in science fictional settings. While some of the stories didn’t grab my attention (and that can probably be attributed to timing and my state of mind more than anything else), it’s a solid effort to show that writers bleed through genre lines more often that we realize. I did, however, really enjoy the following stories: “Portal” – J. Robert Lennon, “The Inner City” – Karen Heuler, “Topics in Advanced Rocketry” – Chris Tarry, “A Precursor of the Cinema” – Steven Millhauser, “Monstros” – Junot Díaz, and “Near-Flesh” – Katherine Dunn. These explore the weirdness of human psyche and will linger in my mind for a long time.

Thanks to Netgalley and Tachyon Pub for a review copy! 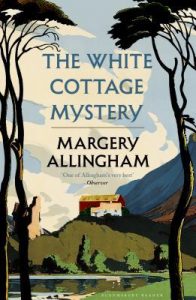 The White Cottage Mystery, initially published in 1927, is a straightforward, classic mystery following the murder of a man who lives in a white cottage. The characterizations are simple, the story is simple, but the writing compels one to keep reading to figure out what happened. It’s shorter than I expected, and I finished it in a sitting and a half. While I was reading it, I was hoping for more depth in characterization, but it’s a solid, traditional mystery with all of those conventional twists, turns, and red herrings. Margery Allingham is part of those writers from the Golden Age of mystery writers and is one to whom Agatha Christie admired. If you’re a fan of Christie’s mysteries, you may be interested in this one!

Thanks to Netgalley and Bloomsbury for a review copy!