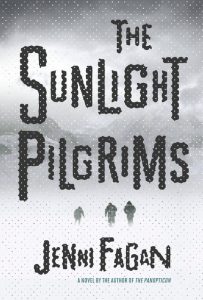 The stunning new novel from the highly-acclaimed author of The Panopticon
It's November of 2020, and the world is freezing over. Each day colder than the last. There's snow in Israel, the Thames is overflowing, and an iceberg separated from the Fjords in Norway is expected to drift just off the coast of Scotland. As ice water melts into the Atlantic, frenzied London residents evacuate by the thousands for warmer temperatures down south. But not Dylan. Grieving and ready to build life anew, he heads north to bury his mother's and grandmother's ashes on the Scottish islands where they once lived.
Hundreds of miles away, twelve-year-old Estella and her survivalist mother, Constance, scrape by in the snowy, mountainous Highlands, preparing for a record-breaking winter. Living out of a caravan, they spend their days digging through landfills, searching for anything with restorative and trading value. When Dylan arrives in their caravan park in the middle of the night, life changes course for Estella and Constance. Though the weather worsens, his presence brings a new light to daily life, and when the ultimate disaster finally strikes, they'll all be ready.
Written in incandescent, dazzling prose, The Sunlight Pilgrims is a visionary story of courage and resilience in the midst of nature's most violent hour; by turns an homage to the portentous beauty of our natural world, and to just how strong we can be, if the will and the hope is there, to survive its worst.

You can drink light right down into your chromosomes, then in the darkest minutes of winter, when there is a total absence of it, you will glow and glow and glow.

It’s 2020 in Scotland, and the world’s freezing over. Jenni Fagan’s The Sunlight Pilgrims is an end-of-the-world novel, but it’s not a loud one. There are no explosions, no aliens taking over the planet, no rampant diseases. Just ice and snow and a chill that never seems to go away. It’s a quiet exploration of family, death, life, and identity when the world as we all know it is ending.

The Sunlight Pilgrims will make you think about your family, and maybe other families too, and hopefully make you realize and every family has its problems. It will make you think about death a little bit and maybe the end of the world and what comes after. But mostly, this book will make you think of some event that led to your “coming of age.” The event that made you cross that line from child to tiny adult, from tiny adult to actual adult. At the heart of it all, The Sunlight Pilgrims is a coming-of-age novel, and sometimes, some of us have several of those coming-of-age moments..

What I liked most about it is Stella. In the midst of the chaotic climate change, she is figuring out her identity and figuring out how to share it with the world without being constantly humiliated. Each of the characters are fully formed with an interesting backstory that links them all together, but I was really curious to see Stella’s story developed, and Fagan raises key points about gender identity that I thought poignant and timely.

I read this in a day, mostly in a single sitting. I don’t often get the chance to do that, and I don’t often become so engrossed in a book that I want to do that. The Sunlight Pilgrims is a haunting, lyrical exploration of a family at the brink of change, for themselves and for the world.

Thank you to Blogging for Books for a review copy!