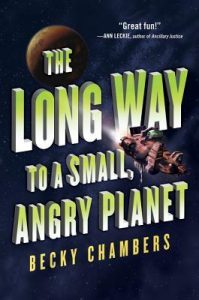 Follow a motley crew on an exciting journey through space—and one adventurous young explorer who discovers the meaning of family in the far reaches of the universe—in this light-hearted debut space opera from a rising sci-fi star.
Rosemary Harper doesn’t expect much when she joins the crew of the aging Wayfarer. While the patched-up ship has seen better days, it offers her a bed, a chance to explore the far-off corners of the galaxy, and most importantly, some distance from her past. An introspective young woman who learned early to keep to herself, she’s never met anyone remotely like the ship’s diverse crew, including Sissix, the exotic reptilian pilot, chatty engineers Kizzy and Jenks who keep the ship running, and Ashby, their noble captain.
Life aboard the Wayfarer is chaotic and crazy—exactly what Rosemary wants. It’s also about to get extremely dangerous when the crew is offered the job of a lifetime. Tunneling wormholes through space to a distant planet is definitely lucrative and will keep them comfortable for years. But risking her life wasn’t part of the plan. In the far reaches of deep space, the tiny Wayfarer crew will confront a host of unexpected mishaps and thrilling adventures that force them to depend on each other. To survive, Rosemary’s got to learn how to rely on this assortment of oddballs—an experience that teaches her about love and trust, and that having a family isn’t necessarily the worst thing in the universe.

Humans’ preoccupation with ‘being happy’ was something he had never been able to figure out. No sapient could sustain happiness all of the time, just as no one could live permanently within anger, or boredom, or grief.

When she joins the crew of the Wayfarer, Rosemary Harper doesn’t expect the motley crew of oddballs, but she comes to find that group of oddballs family and learns a lot about herself, about what makes a family, and about her place in life throughout the journey the Wayfarer takes throughout the course of the book.

I absolutely loved this book. It reminded me of Firefly and Star Trek (The Original Series), and it is such a happy science fiction book that made me giddy every time I opened it up to read more. It seems so rare that we have positive, happy, not-too-cynical science fiction that explores identity, gender, and existence. It’s fun, campy, and smart, and more likely than not, you’ll fly through this book and be left wanting more.

My only disappointments were that I felt that there were too many perspectives for so short a novel and that the characters didn’t develop that much throughout the course of the novel, and that might be because of the wide cast of characters explored throughout. However, it is the first in a loosely connected series (or duology), so I’m looking forward to seeing Chambers’ writing in her second book.

I’ve been recommending this to everyone, from die-hard sf fans to people who have rarely, if ever, dipped their toes in sf. It’s a great addition to the genre – especially because we need more happy, hopeful sf books – and it’s a great introduction to the genre.