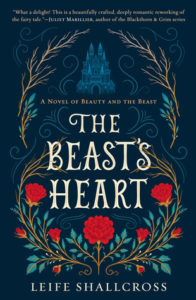 A sumptuously magical, brand new take on a tale as old as time—read the Beast's side of the story at long last.

I am neither monster nor man—yet I am both.

I am the Beast.

The day I was cursed to this wretched existence was the day I was saved—although it did not feel so at the time.

My redemption sprung from contemptible roots; I am not proud of what I did the day her father happened upon my crumbling, isolated chateau. But if loneliness breeds desperation then I was desperate indeed, and I did what I felt I must. My shameful behaviour was unjustly rewarded.

My Isabeau. She opened my eyes, my mind and my heart; she taught me how to be human again.

Lose yourself in this gorgeously rich and magical retelling of The Beauty and the Beast that finally lays bare the beast's heart.

It feels like it’s been forever since a I read a fairy tale retelling that was set in its traditional time period. The Beast’s Heart is a Beauty and the Beast retelling set in 17th century France that evokes a lot of the style and magic of what I associate with the fairy tale. Shallcross manages to retell a familiar tale set in a familiar landscape and somehow make it entirely infused with a fresh magic. This retelling is told from the Beast’s perspective, and Shallcross does a fantastic job of letting us into the mind of the beast, showing us the arrogance and the assumptions that the young woman should love him just because he saved her. She shows his growth from “the beast” to “the prince” in a sympathetic and true way, and I liked seeing the Beast’s growth from his own perspective.

While this does stay true to the original tales, as I get older, I realize and recognize some of the weird behaviors that are often swept aside for the romance. As someone in her 30s now, I do find it generally off-putting for men to continually ask someone else out even after she’s said no, find non-consensual voyeurism strange, and think that the whole “woe is me, please love me I’m alone” deal to be tired. You’ll find all of this in the book, and on one hand it is grating and off-putting. I found myself thinking “just leave her alone!” several times when the Beast kept making his advances. I thought some of the scenes where the Beast was watching Isabeau and her family through his magic mirror to add a depth to the story, but there were times he watched Isabeau for the sake of watching her (and in one scene watching her undress). The Beast also bemoans his lack of humanity and the horrors of his beast self, and the consistency with which that happens gets old after a while. But there are people out there in the world who behave this way, and the Beast does come to his senses, matures, and begin reversing a lot of those thoughts and behaviors by the book’s end.

I thought the descriptions of the chateau and its surroundings were beautiful, the dialogue is sparkling, and the pacing is just right for a story like this. It reminded me a lot of the fairy tale retellings I read ages ago by Robin McKinley, Donna Jo Napoli, and Gail Carson Levine, so it left me with good feelings by the end.