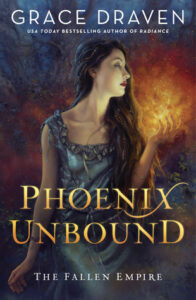 For Gilene, spring was the season neither of rain nor of planting, but of suffering.

She waited beside her mother, sister, and brothers as the caravan of shackled women plodded down Beroe’s market street toward the town square. The slavers of the Empire guided the line, shoving their cargo forward with harsh commands and the occasional warning crack of a whip.

She had already exchanged farewells with her mother and siblings. Each had embraced her, dry-eyed and grim-faced. This wasn’t their first parting, and for good or ill, it wouldn’t be their last.

Her eldest brother, Nylan, squeezed her shoulder. “We’ll be waiting for you in the usual spot,” he said in low tones meant for only her to hear. Gilene nodded, reaching up to pat his hand.

Her eyebrows arched when her mother sidled a little closer, her fingertips brushing Gilene’s sleeve in a hesitant caress, “Come back to us when it’s over.”

Gilene kept her reply behind her teeth. It was never over. Not for her. Despite her mother’s half-hearted gesture of comfort, she wouldn’t defend her daughter. Gilene would endure this every year until her age and her scars crippled her so badly, she could no longer wield her magic well enough to fool the Empire, and her burden became another’s. Her resentment served to blunt her fear.

I don’t remember exactly where I found this title, but I was in the mood for specifically fantasy romance, so I’m sure I found this on a Goodreads list and added it to my TBR!