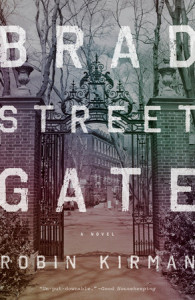 A tour de force about three friends affected by a campus murder, for readers of Donna Tartt, Meg Wolitzer, and Jeffrey Eugenides.

Georgia, Charlie and Alice each arrive at Harvard with hopeful visions of what the future will hold. But when, just before graduation, a classmate is found murdered on campus, they find themselves facing a cruel and unanticipated new reality. Moreover, a charismatic professor who has loomed large in their lives is suspected of the crime. Though his guilt or innocence remains uncertain, the unsettling questions raised by the case force the three friends to take a deeper look at their tangled relationship. Their bond has been defined by the secrets they’ve kept from one another—Charlie’s love and Alice’s envy, Georgia’s mysterious affair—and over the course of the next decade, as they grapple with the challenges of adulthood and witness the unraveling of a teacher's once-charmed life, they must reckon with their own deceits and shortcomings, each desperately in search of answers and the chance to be forgiven. A relentless, incisive, and keenly intelligent novel about promise, disappointment, and the often tenuous bonds of friendship, Bradstreet Gate is the auspicious debut of a tremendously talented new writer.

The copy on the back of Bradstreet Gate compares the novel to Donna Tartt’s The Secret History. That’s really what drew me in to choose the book in the first place, and I felt surprised that I hadn’t heard about the book until I saw it as an option on Blogging for Books. The only comparisons I found to The Secret History were the simple fact that this novel revolves around a group of students attending Harvard (and what comes after) and that there is a death/murder of a student. Other than that, the comparison ceases to be relevant.

Bradstreet Gate is a character novel, and there is no blatant revelation over who killed Julie Patel. It could have been Storrow, it could have been Alice, and it could have been Charlie, but nothing is ever made quite clear and I found that entirely frustrating. Halfway through I thought it might have been Alice because of her stilted relationship to everyone else on campus, but as the novel progressed and Charlie became more and more successful with weird little hints and recollections of “what he did,” I have to wonder if Charlie was the one who did it. He was the little brother, the one his father “[looked] for ways to be rid of him.” Charlie had a strained relationship with his father, and his father always referred to his youngest son as “the judge.” Charlie’s the one who shows an interest in Georgia, who has a relationship with Storrow the professor, and he shows a passing interest in Julie Patel and later finds out she has a boyfriend. In his frustration over Storrow’s relationship with Georgia, Charlie could have very easily staged Julia’s murder to destroy Storrow, which did happen. On the other hand, Storrow had a military history and had the working knowledge to execute a flawless murder.

The writing was clean, but I found everything structural in the novel to be lacking clarity and cohesion. The characters lacked depth and resonance (as in I didn’t really feel anything at all towards any of them), the plot and pacing seemed jumpy, like one moment it was one day and years had passed in the next paragraph. I felt like I had to read the last several pages just to make sense of what happened and to see if I’d missed some important, revelatory detail. I didn’t. It just sort of ends, falls off, and nothing’s really resolved.

However, after reading the essay in the back of the book, there is some connection thematically to some of the content of the novel. Kirman writes that she had a charged friendship with a professor of hers as a student with whom she had a relationship ten years later, and it got me thinking of this novel in the sense that she is trying to come to terms with that relationship and the attraction students have to their instructors. At the beginning of the essay, she writes, “Why did people speak of falling in love? Why was the experience of romantic enchantment described as a fall?” In that context, and if that context was advertised with the book in the first place, I might have gone into reading the book differently. The essay in the back of was my favorite part about the book, and I’ll be thinking about some of the ideas she presented for quite a while.

“What George Eliot understood so well about young women – and intellectualism and naïveté and practical life and corporeal desire – can be revealed, also, by experience. Reality inevitably assaults our fantasies and brings the objects of our infatuation down to earth, whether we wish it to or not.”

“Possibly he was after the same idea that I’ve introduced here: the fall from grace accomplished by Eve, thanks to her wish to taste of wisdom reserved for God alone. Such a wish may not drive everyone who falls, head over heals, but I suspect it is present whenever some co-ed finds her pulse quickening as her dark, magnetic professor looks her way, and she begins to dream only about him, and to ignore the boys who sit beside her in the dining hall or stalk the showers of her dorm. Rules may discourage her from doing more than dreaming – they might try to rescue her from her own desires – but now and then she’s bound to fall. That’s just part of the story of being young, human, and hungry: tempted to seek knowledge beyond what is permitted, in the highest places and forms, and in the lowest, too.”

Book provided for an honest review by Blogging for Books.