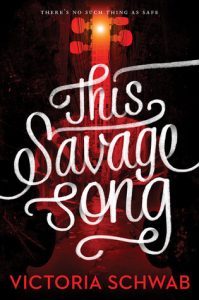 There’s no such thing as safe.
Kate Harker wants to be as ruthless as her father. After five years and six boarding schools, she’s finally going home to prove that she can be.
August Flynn wants to be human. But he isn’t. He’s a monster, one that can steal souls with a song. He’s one of the three most powerful monsters in a city overrun with them. His own father’s secret weapon.
Their city is divided.
Their city is crumbling.
Kate and August are the only two who see both sides, the only two who could do something.
But how do you decide to be a hero or a villain when it’s hard to tell which is which?

You wanted to feel alive, right? It doesn’t matter if you’re monster or human. Living hurts.

I really enjoyed this book. Victoria Schwab has quickly risen to be one of those authors that I’ll auto-buy anything she writes. This Savage Song is set in a post-apocalyptic North America in which humans and monsters are separated by a literal divide. August and his siblings are monsters who use musical abilities to wreak havoc against their enemies, and Kate and her father are humans who are on the opposing side of monsters. August is sent across the border to get to know Kate, and instead of becoming enemies, the two become friends.

There are things I didn’t really enjoy but I know, in the end, are acceptable and understandable in the grand scheme of the narrative. The first fifth of this book was a little slow for me (and I wondered if I was going to even like it, but then it got unputdownable) and Kate is very similar to other main female characters in Schwab’s other novels (her snark seems almost forced and goes against her character for a bit of the novel). I think for a world that’s unfamiliar it’s good to have a little bit of a build-up with a slower beginning, and it’s perfectly understandable to have a signature sort of character.

The idea of August’s weapon music through his violin is amazing, and I can’t wait to see how that develops in the sequel. I also really enjoyed that the two main characters weren’t romantic in any way. I find that refreshing in the sense that so many books geared for YA audiences seem overly focused on romance instead of friendship, and friendship is a very important aspect of anyone’s life. The horror aspect of the monsters gave me the shivers and added a depth to the terror rising throughout.

It’s not an entirely new type of story in the world of YA fantasy, but it bends expectations and thrilled me while reading it, and it earns a solid recommendation from me.