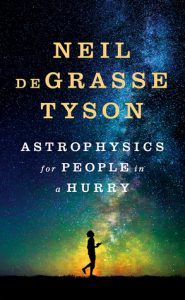 What is the nature of space and time? How do we fit within the universe? How does the universe fit within us? There’s no better guide through these mind-expanding questions than acclaimed astrophysicist and best-selling author Neil deGrasse Tyson.
But today, few of us have time to contemplate the cosmos. So Tyson brings the universe down to Earth succinctly and clearly, with sparkling wit, in tasty chapters consumable anytime and anywhere in your busy day.
While you wait for your morning coffee to brew, for the bus, the train, or a plane to arrive, Astrophysics for People in a Hurry will reveal just what you need to be fluent and ready for the next cosmic headlines: from the Big Bang to black holes, from quarks to quantum mechanics, and from the search for planets to the search for life in the universe.

Neil deGrasse Tyson’s Astrophysics for People in a Hurry is an excellent, fact-packed book about science, space stuff, and physics for people who either don’t have the background in any of the subjects and want to learn more or for people who don’t have the time to read denser books about these subjects but still want to get a decent grasp on the concepts without spending a lot of time getting into the theoretical aspects of it.

What I think I like best about this book is the fact that you can read a chapter at a time and feel like you’ve learned (or refreshed your memory) about some cool stuff that you can then use as a jumping off point for more research, just feel like you can have a general conversation about whatever the chapter covered, and/or understand some of the space concepts covered in the news or on social media. What I think I disliked most was the fact that if I read multiple chapters in one sitting without taking even the tiniest break between them I felt a little lost and confused. This book is definitely something you’ll want to keep on hand and flip through a chapter or two just before bed or in those times while you’re commuting or on a lunch break.

NDT explains complicated subjects well a way that don’t sound condescending to the average reader (or me), and he interjects a lot of humor into his writing which sometimes helps explain some of the more elaborate things. If you’re interested in refreshing your astrophysics knowledge or learning more about space and what we know and don’t know is out there in the universe, this is a great place to start!

Thank you to WW Norton and Netgalley for an advance copy for me to read! All opinions are my own. 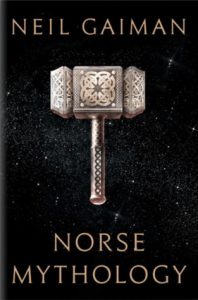