Hello, Friday! First Lines Friday is a feature on my blog in which I post the first lines from a book I am interested in reading, either a new release or a backlist title! For the next several Fridays, I will be featuring titles I am going to hopefully read as part of my 12 Decades/12 Months/12 Books challenge (#12decades12books). I read The Strange Case of Dr Jekyll and Mr Hyde when I was sixteen and found an old beat-up copy in a local used bookstore, and I remember being so entranced with it that I still haven’t stopped thinking about it. When I found it in a little free library, I grabbed it and have been waiting for the right moment to read it again. Now that it’s been half my life ago, I want to revisit it and see how I think about it now. 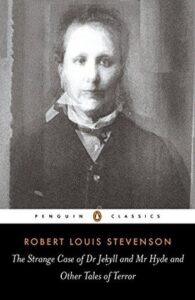 Mr Utterson the lawyer was a man of a rugged countenance, that was never lighted by a smile; cold, scanty and embarrassed in discourse; backward in sentiment; lean, long, dusty, dreary and yet somehow lovable. At friendly meetings, and when the wine was to his taste, something eminently human beaconed from his eye; something indeed which never found its way into his talk, but which spoke not only in these silent symbols of the after-dinner face, but more often and loudly in the acts of his life. He was austere with himself; drank gin when he was alone, to mortify a taste for vintages; and though he enjoyed the theatre, had not crossed the doors of one for twenty years. But he had an approved tolerance for others; sometimes wondering, almost with envy, at the high pressure of spirits involved in their misdeeds; and in any extremity inclined to help rather than to reprove. ‘I incline to Cain’s heresy,’ he used to say quaintly; ‘I let my brother go to the devil in his own way.’ In this character, it was frequently his fortune to be the last reputable acquaintance and the last good influence in the lives of down-going men. And to such as these, so long as they came about his chambers, he never marked a shade of change in his demeanour.

What books have you read a decade ago that you still think about today? Why do you think they’ve stuck with you?