Hello, Friday! First Lines Friday is a feature on my blog in which I post the first lines from a book I am interested in reading, either a new release or a backlist title! This is the last title I’ve chosen that I am going to hopefully read as part of my 12 Decades/12 Months/12 Books challenge (#12decades12books). One of the last essays I ever wrote for my undergraduate degree was on Edith Wharton’s The House of Mirth, and I loved it so much that I made a note to read more of Wharton in the years to come. However, it’s now been almost eight years since I graduated with my bachelor’s degree and I haven’t read another word of Wharton. When Scribner released beautiful new covers on The House of Mirth and The Age of Innocence, I bought both of them and immediately added The Age of Innocence to this #12decades12books challenge. 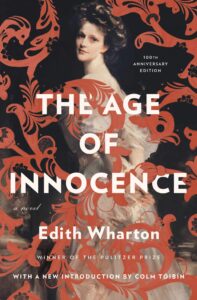 On a January evening of the early seventies, Christine Nilsson was singing in Faust at the Academy of Music in New York.

Though there was already talk of the erection, in remote metropolitan distances “above the Forties,” of a new Opera House which should compete in costliness and splendour with those of the great European capitals, the world of fashion was still content to reassemble every winter in the shabby red and gold boxes of the sociable old Academy. Conservatives cherished it for being small and inconvenient, and thus keeping out the “new people” whom New York was beginning to dread and yet be drawn to; and the sentimental clung to it for its historic associations, and the musical for its excellent acoustics, always so problematic a quality in halls built for the hearing of music.

It was Madame Nilsson’s first appearance that winter, and what the daily press had already learned to describe as “an exceptionally brilliant audience” had gathered to hear her, transported through the slippery, snowy streets in private broughams, in the spacious family landau, or in the humbler but more convenient “Brown coupe.”

What did you read in school that you wouldn’t have picked up otherwise? How has an instructor shaped your enjoyment of something?