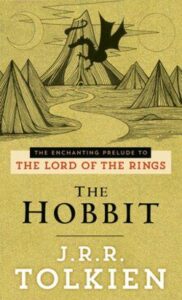 In a hole in the ground there lived a hobbit. Not a nasty, dirty, wet hole, filled with the ends of worms and an oozy smell, nor yet a dry, bare, sandy hole with nothing in it to sit down on or to eat: it was a hobbit-hole, and that means comfort.Written for J.R.R. Tolkien’s own children, The Hobbit met with instant critical acclaim when it was first published in 1937. Now recognized as a timeless classic, this introduction to the hobbit Bilbo Baggins, the wizard Gandalf, Gollum, and the spectacular world of Middle-earth recounts of the adventures of a reluctant hero, a powerful and dangerous ring, and the cruel dragon Smaug the Magnificent.

According to Goodreads, I hadn’t read The Hobbit in eight years. EIGHT! I had been waffling for a few months about revisiting Tolkien’s stuff, and once I saw that it had been that long, I decided to start rereading! The Hobbit is my least favorite part about The Lord of the Rings saga, but it also feels wrong to start reading The Lord of the Rings without beginning with The Hobbit. I think part of the reason it’s been so long in between rereads (I used to read it all at least once a year!) is that I have such a nostalgic view of it because it was a series I was obsessed with right around the time the movies were released. So after seeing how long it’s been since I’ve read them and seeing the films again in IMAX this year, it’s time for a journey back to Middle Earth.

It was everything I remembered it being, and I appreciated the story for what it was! It definitely reads like a children’s book in some places and feels a little over-told sometimes. I also tend to forget the huge gap in between the publication dates of The Hobbit and The Fellowship of the Ring, and it’s evident already as I’ve already started The Fellowship. Tolkien developed so much about Middle Earth that it’s astounding, and with all of these new covers and editions being released in 2020 and in the near future, I want to revisit as much of it as possible.

Bilbo is one of the most relatable fantasy characters to me, someone who only wants to stay undisturbed in his little hobbit hole with a few small adventures here and there, until Gandalf comes along and takes him on a real, true adventure. The whole adventure, Bilbo is “puzzled, yet cheered” and carries on no matter what happens to him. Even though he’s a grumpy hobbit, he’s a grumpy optimistic hobbit, and that sort of optimism helps get him untangled from the worst sorts of situations.

And Bilbo’s last riddle with Gollum certainly wasn’t a riddle.