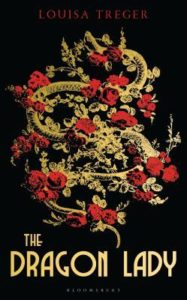 'A daring blend of romance, crime and history, and an intelligent exposé of the inherent injustice and consequences of all forms of oppression' Tsitsi Dangarembga, Nervous Conditions

Opening with the shooting of Lady Virginia 'Ginie' Courtauld in her tranquil garden in 1950s Rhodesia, The Dragon Lady tells Ginie's extraordinary story, so called for the exotic tattoo snaking up her leg. From the glamorous Italian Riviera before the Great War to the Art Deco glory of Eltham Palace in the thirties, and from the secluded Scottish Highlands to segregated Rhodesia in the fifties, the narrative spans enormous cultural and social change. Lady Virginia Courtauld was a boundary-breaking, colourful and unconventional person who rejected the submissive role women were expected to play.

Ostracised by society for being a foreign divorcée at the time of Edward VIII and Mrs Simpson, Ginie and her second husband ,Stephen Courtauld, leave the confines of post-war Britain to forge a new life in Rhodesia, only to find that being progressive liberals during segregation proves mortally dangerous. Many people had reason to dislike Ginie, but who had reason enough to pull the trigger?

Deeply evocative of time and place, The Dragon Lady subtly blends fact and fiction to paint the portrait of an extraordinary woman in an era of great social and cultural change.

Louisa Treger’s The Dragon Lady is about the Ginie Courtald’s life as the “lady with the dragon tattoo.” Set in Rhodesia, current day Zimbabwe, in the early 20th century, Ginie and her husband Stephen find themselves to be find themselves to be relative social outcasts as they each think and behave differently than society deems acceptable. Ginie has a dragon tattooed the length of her body and creates varying stories about her tattoo, and she is also a divorcee with an annulled marriage that further adds to the speculation about her private life. Stephen is an advocate for the arts and advocates for improved treatment of the native population.

Even though as mentioned in the afterword that not many details about the Courtald’s life are known, Treger’s dedication to research and evoking the atmosphere of the era brought this novel and its characters to life. She touches on the claustrophobic racial tensions, the glitz and glamour of high society, and the struggles between wanting to be one’s own self and wanting to fit in with everyone else. Ginie is bright, vivacious, and carries a wonderful depth; and the rest of the characters add such dimension and life to the story.

When I started reading this, I was in the mood for some historical fiction that flowed and The Dragon Lady delivered. I fell into the story and got lost in it, and I came out of it wanting to know more about Rhodesia/Zimbabwe history.

Many thanks to Bloomsbury Publishing for an advance copy! All opinions are my own.