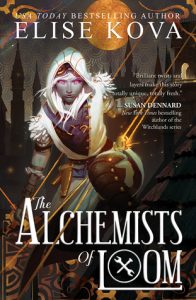 Her vengeance. His vision.

Ari lost everything she once loved when the Five Guilds’ resistance fell to the Dragon King. Now, she uses her unparalleled gift for clockwork machinery in tandem with notoriously unscrupulous morals to contribute to a thriving underground organ market. There isn’t a place on Loom that is secure from the engineer turned thief, and her magical talents are sold to the highest bidder as long as the job defies their Dragon oppressors.

Cvareh would do anything to see his sister usurp the Dragon King and sit on the throne. His family’s house has endured the shame of being the lowest rung in the Dragons’ society for far too long. The Alchemist Guild, down on Loom, may just hold the key to putting his kin in power, if Cvareh can get to them before the Dragon King’s assassins.

He offers her the one thing Ari can’t refuse: A wish of her greatest desire, if she brings him to the Alchemists of Loom.

Don’t let the shadows of the past smother the possibility for a bright future.

Elise Kova’s The Alchemists of Loom follows Ari after the five guilds fall to the Dragon King. She meets Cvareh, who is wounded, and she thinks she can kill him off as some kind of revenge, but she decides not to when she learns he can grant her the boon she wants if she takes him to the Alchemists of Loom.

Premise of this is amazing and right up my alley, but something about it fell short for me. Most of it has to do with the fact that we’re thrown in media res without much explanation or world building. We’re just supposed to piece it together with the help of a glossary in the back (which one might not know about if one’s reading a digital copy) or through hints made throughout the story. I don’t mind it if a world is built as sort of an unfolding, but this was like opening up a single folded sheet of paper. You open it and it’s all there like glitter and you’re supposed to keep it all together while trying not to let it spill everywhere. It took me to get about halfway through the book until I felt familiar enough with the world and the characters and the rest of the details to start enjoying the book. I kept reading only because I wanted to know what Cvareh would do.

This book falls under the steampunk fantasy variety and features an indistinct world in which everything happens. There are five guilds with distinct practices, a Dragon king (and I was a little bit disappointed to discover they weren’t actually dragons), shady characters, some light romance that felt entirely forced (oh yes the main girl and the main guy argue all the time and clash all the time so of course they’ll automatically like each other).

Ari reminded me a lot of Celaena in Maas’s Throne of Glass series before she became Aelin, and Ari in this novel is a well-known criminal with an intent to restore Loom to its former glory before the Dragons took over. Her motive is unclear though, and I don’t really find a connection or sympathy to a character who has a mission. She is unyielding to that mission, but she has no clear motive for what she does, just that things must be made right. Okay? But why? Her sidekick/lover/girlfriend/??? Florence is more interesting and believable than Ari. Cvareh is the trickster sort of character who seems to flip flop between wanting to save himself, work for the Dragons, or help Ari, and the most interesting twists of the story seem to come from his actions.

The story’s action moves at a brisk pace, and I enjoyed that about the book. I just wish I had a bit more of Ari’s backstory to connect her motive with her actions and reactions because a lot of Ari’s life and relationships read completely unclear. I am going to see what the reviews are for the second one to gauge reactions to what happens next before I pick it up, but I hope it focuses more on Cvareh’s side of things!

Overall, it’s an enjoyable fantasy if someone’s ready to take a step up from “YA” fantasy and try something new.

A review copy of this book was provided to me for review by Netgalley and the publisher. All opinions are my own.