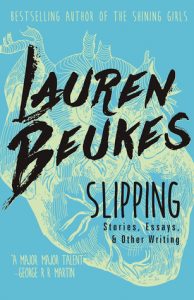 In her edgy, satiric debut collection, award-winning South African journalist and author Lauren Beukes (The Shining Girls, Moxyland) never holds back. Nothing is simple and everything is perilous when humans are involved: corruption, greed, and even love (of a sort).
A permanent corporate branding gives a young woman enhanced physical abilities and a nearly-constant highRecruits lifted out of poverty find a far worse fate collecting biohazardous plants on an inhospitable worldThe only adult survivor of the apocalypse decides he will be the savior of teenagers; the teenagers are not amused.
From Johannesburg to outer space, these previously uncollected tales are a compelling, dark, and slippery ride.

You might think of a city as a map, all knotted up in the bondage of grid lines by town planners. But really, it’s a language—alive, untidy, ungrammatical. The meaning of things rearranges, so the scramble of the docks turns hipster cool while the faded glamor of the inner city gives way to tenement blocks rotting from the inside. It develops its own accent, its own slang. And sometimes it drops a sentence. Sometimes the sentence finds you. And won’t shut up. – from “Ghost Girl”

I’ve had Beukes’s The Shining Girls on my shelf forever. It was on a lot of lists the year it was released, and I found a paperback of that book in a used bookstore, I bought it… and haven’t gotten around to reading it yet. Story of my life. Anyhow, when given the opportunity to read Beukes’s short works, I jumped at the chance. I love short story collections because I feel that short story collections allow the reader to see the wide range of an author’s talent.

Beukes’s writing is acerbic, sharp, and intuitive, and I was drawn in immediately to many of her stories. Slipping is a collection of stories written over about ten years for various other publications, and I would have really liked to have some background information before or after the stories to know when and why each of these stories were written.

My favorite stories were “Princess,” “Exhibitionist,” “Ghost Girl,” and “Dial Tone.” Each of these stories made me whisper what after I finished reading them. Beukes’s writing is at the same time subtle and straightforward. She does not shy away from difficult or terrifying imagery, and she makes you think about why she uses that imagery to explore some weird aspect of human life. Many of her stories cross the genre line between fiction and science fiction, and while a lot of it seems weird at times, it’s also so eerily recognizable. Beukes’s writing asks us why we consider “commonplace” and “everyday” as commonplace and ordinary, because isn’t life weird?

Thank you to Netgalley and Tachyon Publications for a review copy!