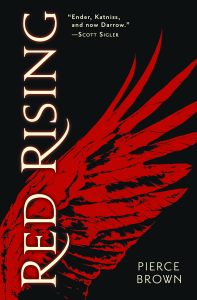 The Earth is dying.Darrow is a Red, a miner in the interior of Mars. His mission is to extract enough precious elements to one day tame the surface of the planet and allow humans to live on it.The Reds are humanity's last hope.
Or so it appears, until the day Darrow discovers it's all a lie.
That Mars has been habitable - and inhabited - for generations, by a class of people calling themselves the Golds.A class of people who look down on Darrow and his fellows as slave labour, to be exploited and worked to death without a second thought. Until the day that Darrow, with the help of a mysterious group of rebels, disguises himself as a Gold and infiltrates their command school, intent on taking down his oppressors from the inside.
But the command school is a battlefield - and Darrow isn't the only student with an agenda.
Break the chains.
Live for more.


I read this book over the summer on the way down to Florida to go on a cruise. I found it a fast, fun, engaging read, and I’m looking forward to reading the rest of the trilogy. It draws on a lot of popular series in fiction, and that’s all right, because I think Brown does an excellent job reinventing and reimagining those tropes. If you enjoy the Hunger Games and want something deeper and like the intrigue of Game of Thrones, I’m sure you’ll like Red Rising.

Darrow, the main character, is born on Mars and mines beneath the surface. He’s of a lower caste than others, but then he’s modified, becomes perfect in the eyes of the law, and is chosen to be sent to an arena-sized game board to fight for dominance. Through his transformation from someone of a lower caste to someone in a higher caste, we get an insight into the unfairness of class treatment and the effects it has on society as it trickles down. During Darrow’s transformation, we also get political insight into why the Reds are Trojan horsing themselves into the upper castes. For freedom, mostly, and that’s what a lot of the “lesser” people in any society tend to fight for.

It’s a little unbelievable sometimes, even for science fiction, but I liked how Brown didn’t take the time to explain all of the foreign details straight away. He uses words, phrases, technology, and ideas (like headTalk, helldiver, and frysuit), and incorporates them into the story, building upon them and expanding our horizons as he does so. Not everything should be explained right away. Good exposition does that for us. Sometimes the writing seems a little melodramatic and over-the-top, but I think it’s supposed to be that way. Upper classes often puff themselves up and make themselves seem more important than they really are, using frivolous language to embellish everything.

Brown does know how to write and how to keep the pace, and his editor does him a service. There wasn’t a time while reading this that I felt bored or felt that the story dragged on. It’s brutal and engaging, and it left you wanting more. It’s got great character development, great action, and an ending that will leave you wanting more (and thankfully there is more!). Definitely pick this up if you’re in the mood for some great science fiction