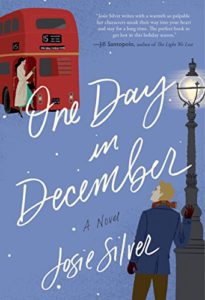 “Get ready to be swept up in a whirlwind romance. It absolutely charmed me.” —Reese Witherspoon

“Josie Silver writes with a warmth so palpable her characters sneak their way into your heart and stay for a long time.”—Jill Santopolo, New York Times-bestselling author of The Light We Lost

Laurie is pretty sure love at first sight doesn't exist anywhere but the movies. But then, through a misted-up bus window one snowy December day, she sees a man who she knows instantly is the one. Their eyes meet, there's a moment of pure magic...and then her bus drives away.

Certain they're fated to find each other again, Laurie spends a year scanning every bus stop and cafe in London for him. But she doesn't find him, not when it matters anyway. Instead they "reunite" at a Christmas party, when her best friend Sarah giddily introduces her new boyfriend to Laurie. It's Jack, the man from the bus. It would be.

What follows for Laurie, Sarah and Jack is ten years of friendship, heartbreak, missed opportunities, roads not taken, and destinies reconsidered. One Day in December is a joyous, heartwarming and immensely moving love story to escape into and a reminder that fate takes inexplicable turns along the route to happiness.

Josie Silver’s One Day in December was the perfect, magical Christmas read I wanted. It reminded me a lot of the movie Love, Actually in its tone, but it was also new and fresh as well. One Day in December follows two friends, Laurie and Sarah, as they navigate life from the day Laurie sees Jack at the bus stop until the end of the book. A year after Laurie sees a man at the bus stop and has an immediate connection with him (and during that year doesn’t stop looking for him), Sarah brings that same exact man to a holiday party, and his name is Jack. Laurie and Jack recognize each other immediately, and over the course of almost a decade try to make the right choices in their own lives even though they are continually drawn to each other.

I loved how the story was told in alternating points of view of Laurie and Jack and that each of them felt well developed, growing and changing as time went on while each of them still had a deeply rooted, sometimes inexplicable, connection with each other. It was love at first sight, and both of them remained connected from that moment at the bus stop.

It’s a modern fairy tale, and I thoroughly enjoyed every minute of it. I couldn’t put it down, and I can’t wait to read her next one!