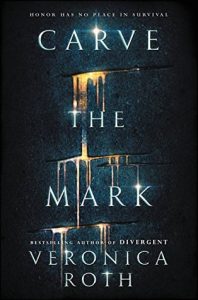 On a planet where violence and vengeance rule, in a galaxy where some are favored by fate, everyone develops a currentgift, a unique power meant to shape the future. While most benefit from their currentgifts, Akos and Cyra do not—their gifts make them vulnerable to others’ control. Can they reclaim their gifts, their fates, and their lives, and reset the balance of power in this world?
Cyra is the sister of the brutal tyrant who rules the Shotet people. Cyra’s currentgift gives her pain and power—something her brother exploits, using her to torture his enemies. But Cyra is much more than just a blade in her brother’s hand: she is resilient, quick on her feet, and smarter than he knows.
Akos is from the peace-loving nation of Thuvhe, and his loyalty to his family is limitless. Though protected by his unusual currentgift, once Akos and his brother are captured by enemy Shotet soldiers, Akos is desperate to get his brother out alive—no matter what the cost. When Akos is thrust into Cyra’s world, the enmity between their countries and families seems insurmountable. They must decide to help each other to survive—or to destroy one another.

So, I should preface this with a few key points. I work for a bookstore and received an ARC of this book through my job. All opinions are my own. This review is not an attack on the author, the publisher, or anyone else. I am also white, and I am aware this affects my position to call something out as racist. I find that it’s helpful to raise awareness of problematic representation in the media we consume.

In regards to advance copies being sent out to reviewers, I’ve noticed in a lot of Goodreads reviews that the bloggers state either at the beginning or the end of their review that HarperTeen (HT from here on out) sponsored these reviews. Further research led me to discovering that HT paid this set of bloggers to review Carve the Mark. This behavior from a publisher is unsettling. Generally speaking, if one is going to be paid for reviewing something, one will not review the thing unfavorably (and if one reviews unfavorably, that reviewer runs the risk of tarnishing the relationship with said publisher). This behavior by the publisher is akin to self-published authors paying readers to post positive reviews of the work in order to boost sales. That’s what I feel like HT is doing. Perhaps HT was aware of the problematic material in the book and decided to garner a set of positive reviews to boost sales before the book’s official release. I feel as if that money could have been better used to assist Roth in adjusting some of the problematic ideas presented in the book.

I stopped reading at page 66. I was simultaneously bored and unsettled by the book and set it aside. This being said, I do not know how the book ends or develops, and I honestly don’t care. Here are the main things I found problematic within those first 66 pages:

I was excited for this because there aren’t too many science fiction novels lately for the YA audience. However, the problems in the novel fail its readers by relying on outdated, racist tropes that should be a thing of the past in 2017. Science fiction is about creating new worlds, exploring new ideas, and finding some kernel of society to examine. Carve the Mark does none of this. Instead of drawing on redundant, harmful tropes, science fiction should offer the author and the readers the ability to create something new, to flip tropes and reinvent them. It seems as if the editors failed to notice or didn’t care, knowing that they’d have a cash-grab with the popular name attached; or it seems as if Roth is privileged enough to be unaware of the damage she has caused with these themes. Maybe it’s a combination of both.

After the roller coaster of the last several years with the Black Lives Matter movement, the systematic oppression of Muslims, and the discussions I have had and read, I’m finding myself more and more sensitive to the plights of those who are oppressed. I want to give those people a voice rather than reinforce harmful views. Instead of purchasing or reading this, I recommend finding, like many others have suggested, an own voices/diverse work. My personal recommendation is N.K. Jemisin’s The Fifth Season.