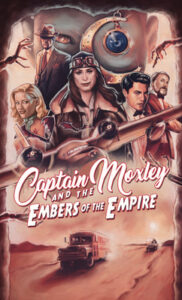 An ex-Spitfire pilot is dragged into a race against a shadowy government agency to unlock the secrets of the lost empire of Atlantis...

In post-war 1952, the good guys are supposed to have won. But not everything is as it seems when ex-Spitfire pilot Captain Samantha Moxley is dragged into a fight against the shadowy US government agency she used to work for. Now, with former Nazis and otherworldly monsters on her trail, Captain Moxley is forced into protecting her archaeologist sister in a race to retrieve two ancient keys that will unlock the secrets of a long-lost empire - to ensure a civilisation-destroying weapon doesn't fall into the wrong hands. But what will she have to sacrifice to save the world?

It felt like those in the west had a talent for skipping straight out of one war and into another, as though they had a lust for it, while the locals would be left to clean it up when they had gone. More and more, the glorious ideas of “Empire” were revealed to be nothing more than fancy dressing when you saw the realities of those who came to suffer beneath its polished boots, blinkered ambition, and secret agendas.

Dan Hanks’s Captain Moxley and the Embers of the Empire is a action-packed adventure that reminded me a lot of a cross between Marvel’s Captain America and the Indiana Jones universe with a dash of The Mummy and National Treasure. Captain Moxley is a take-no-shit heroine who races to protect her sister from a shady section of the United States government involving Nazis, genetically modified beings, and aliens? Yes, this novel is incredibly pulpy and uses a lot of familiar tropes to the genre, but it’s a page-turner with a lot of heart and a lot of insight that made me want to see where Captain Moxley was headed.

One of the things I liked the most about this was that Hanks does explore colonialism and the “empire” in archeological history and what that means for everyone involved. It’s an important conversation to have when we consider how many, if not all, of the artifacts of our museums come from colonialist “exploration.” I loved the dynamic between Samantha and her sister Jessica, and I thought the balance of being a protective sibling while also learning to let the other make choices because she’s her own person was well done. I also loved the genderbent characters and how those flips toyed with the genre’s tropes and expectations. Even though I took my time reading it (thirty minutes for lunch only leaves for bite-sized reading sprints), I found it easy to follow and compulsively readable with a lot of fun surprises throughout. It’s pulp fiction at its best and pulls in so much of what I like reading in genre fiction and making it new, too.

This book feels like an action-adventure film or even a video game, and once you’ve strapped yourself in, you’re in for a ride. There are a few anachronisms, mostly in the use of language, but in the scope of the novel, it’s not entirely noticeable at all in the midst of it all. Because it’s so cinematic, I think these anachronisms are to be expected. But if that sort of thing bothers you, then it’s something to be aware of!

I really hope to see more from Hanks and this world he’s created with Captain Moxley, and this ends with a set-up for a sequel, so I hope there’s one coming out in the future! I’d love to see how Captain Moxley continues to handle her relationship with her sister and the discovery/exploration of Atlantis and everything else that has come with finding those amulets and the Hall of Records.

Thank you to Angry Robot for sending me a complimentary copy of this book to review and feature! All opinions are my own.