I’m starting a new feature that will post every Friday, and do feel free to do it along with me! It’s an evolution of First Chapter, First Paragraph that I did for a while, but I wanted to start having set posts on certain days to help with my blogging schedule! First Lines Friday will feature the first few lines of any book that interests me, new or old! This week I’m featuring Tamsyn Muir’s Gideon the Ninth, a book I’m currently reading and still super excited about. I first heard about it last year when it was announced — “lesbian necromancers in space” — and promptly preordered it. Ever since I got it, I’ve been waiting for the right moment to savor it, and I’ve taken my time with it this month. So far, it’s definitely living up to my expectations. Without any further adieu, here are the first lines from the book! 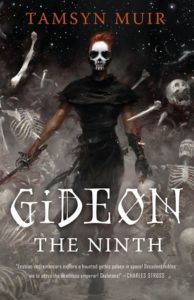 In the myriadic year of our Lord — the ten thousandth year of the King Undying, the kindly Prince of Death! — Gideon Nav packed her sword, her shoes, and her dirty magazines, and she escaped from the House of the Ninth.

She didn’t run. Gideon never ran unless she had to. In the absolute darkness before dawn she brushed her teeth without concern and splashed her face with water, and even went so far as to sweep the dust off the floor of her cell. She shook out her big black church robe and hung it from the hook. Having done this every day for over a decade, she no longer needed light to do it by. This late in the equinox no light would make it here for months, in any case; you could tell the season by how hard the heating vents were creaking. She dressed herself from head to toe in polymer and synthetic weave. She combed her hair. Then Gideon whistled through her teeth as she unlocked her security cuff, and arranged it and its stolen key considerately on her pillow, like a chocolate in a fancy hotel.

Have you read this? Is it on your to-read list?

Oof, the last time I did a post like this was back in October! Waiting on Wednesday is a weekly meme originally hosted by Jill at Breaking the Spine (though it seems as though it’s been a while since she updated that particular blog, so if you know of the current host, if there is one, please let me know) that highlights upcoming releases that we’re impatiently waiting for. This week I’m highlighting some new/upcoming fantasy books that I can’t wait to read!

Tamsyn Muir’s Gideon the Ninth “unveils a solar system of swordplay, cut-throat politics, and lesbian necromancers. Her characters leap off the page, as skillfully animated as necromantic skeletons. The result is a heart-pounding epic science fantasy.” Rebecca Roanhorse calls it the “Gothic space fantasy” she didn’t know she needed. Um. GIVE IT TO ME. September is TOO FAR AWAY. It releases September 10, 2019!

AN ILLUSION OF THIEVES – CATE GLASS

Being a sorcerer is a death sentence. But “when a plot to overthrow the Shadow Lord and incite civil war is uncovered, only Romy knows how to stop it. To do so, she’ll have to rely on newfound allies—a swordmaster, a silversmith, and her own thieving brother. And they’ll need the very thing that could condemn them all: magic.” Magic and politics and an amazing cover? Yesss. I actually preordered this one, and I’m going to read it soon! It released May 21, 2019.

THE GODS OF JADE AND SHADOW – SILVIA MORENO-GARCIA

The “Mayan god of death sends a young woman on a harrowing, life-changing journey in this dark, one-of-a-kind fairy tale inspired by Mexican folklore” and it’s set in the Jazz Age? Give me those fairy tales, and give me them set in the Jazz Age because I think it’s a perfect setting for some “modern” fairy tales. Silvia Moreno-Garcia’s The Gods of Jade and Shadow comes out July 23, 2019.

I’ve followed Sam for a long time on Twitter and I think he’s hilarious, and I still haven’t read any of his books. I bought The City Stained Red forever ago, but something about Seven Blades in Black is calling to me. Maybe it’s because I’m a sucker for stories told by people after the fact and I like somewhat unreliable narrators. She was “betrayed by those she trusted most, her magic torn from her and awaiting execution, Sal the Cacophony has one last tale to tell before they take her head. All she has left is her name, her story and the weapon she used to carved both.” It came out April 9, 2019!

THE HARP OF KINGS – JULIET MARILLIER

I read Marillier’s Daughter of the Forest ages ago as part of my “must read all the fairy tale retellings” (and now that I’m thinking about it, I’m due for a reread of some of those books), and I remember really falling in love with the world she created. When I saw that she was coming out with a new series about a WARRIOR BARD who needs to find and retrieve a “precious harp, an ancient symbol of kingship, which has gone mysteriously missing” AND “if the instrument is not played at the upcoming coronation, the candidate will not be accepted and the people could revolt. Faced with plotting courtiers and tight-lipped druids, an insightful storyteller, and a boorish Crown Prince, Liobhan soon realizes an Otherworld power may be meddling in the affairs of the kingdom.” As soon as I read that, I WAS LIKE SIGN ME UP.

Are any of these on your radar? What are you looking forward to reading in the upcoming months?