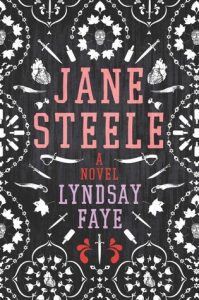 A reimagining of Jane Eyre as a gutsy, heroic serial killer, from the author whose work The New York Times described as “riveting” and The Wall Street Journal called “thrilling.”   “Young Jane Steele’s favorite book, Charlotte Bronte’s Jane Eyre, mirrors her life both too little and too much…In an arresting tale of dark humor and sometimes gory imagination, Faye has produced a heroine worthy of the gothic literature canon but reminiscent of detective fiction.”—Library Journal, Starred Review
“Reader, I murdered him.”   A sensitive orphan, Jane Steele suffers first at the hands of her spiteful aunt and predatory cousin, then at a grim school where she fights for her very life until escaping to London, leaving the corpses of her tormentors behind her. After years of hiding from the law while penning macabre “last confessions” of the recently hanged, Jane thrills at discovering an advertisement.  Her aunt has died and her childhood home has a new master: Mr. Charles Thornfield, who seeks a governess.   Burning to know whether she is in fact the rightful heir, Jane takes the position incognito, and learns that Highgate House is full of marvelously strange new residents—the fascinating but caustic Mr. Thornfield, an army doctor returned from the Sikh Wars, and the gracious Sikh butler Mr. Sardar Singh, whose history with Mr. Thornfield appears far deeper and darker than they pretend. As Jane catches ominous glimpses of the pair’s violent history and falls in love with the gruffly tragic Mr. Thornfield, she faces a terrible dilemma: can she possess him—body, soul, and secrets—without revealing her own murderous past?   A satirical romance about identity, guilt, goodness, and the nature of lies, by a writer who Matthew Pearl calls “superstar-caliber” and whose previous works Gillian Flynn declared “spectacular,” Jane Steele is a brilliant and deeply absorbing book inspired by Charlotte Brontë’s classic Jane Eyre.

Reader, I murdered him.

I’ve never read Faye’s work before, and I was going to put off reading Jane Steele until I’d read a few of her others, but when I saw the book on the library shelves, I grabbed it, sat down, and read it in a day. I wouldn’t necessarily call this a Jane Eyre retelling, but it’s certainly Jane Eyre-inspired, as evidenced from Jane Steele’s fondness for the Charlotte Brontë novel.

Jane Steele’s life follows a similar trajectory as the character Jane Eyre, and she finds comfort in her fictional counterpart. The major difference between Steele and Eyre is that while Eyre merely struggles and sometimes voices her discontent against the female imprisonment and injustice in society by men, Steele actually does something about it. And by doing something about it, she murders the offending men. She isn’t a serial killer. She murders in self-defense, as a way to protect her life and the lives of others.

It’s well-paced, vicious, atmospheric, and a little predictable if you’re familiar with Jane Eyre’s story. The way in which Faye writes makes you feel as if you’re in the dirty heart of Victorian London. The biggest, most frustrating aspect of the entire thing was how forced Steele’s relationship felt with Thornfield most of the time, almost as if Steele expected and forced her life to follow in Eyre’s footsteps because that’s what she was familiar with and that’s where she found comfort. But there’s a scene with Clarke that made me gasp and sigh and long for so much more development in that direction. That would have been the twist that earned that fifth star.

If you enjoy Jane Eyre and its many incarnations; Victoriana; and historical fiction with strong, deviant women, you’ll surely find something to enjoy in Jane Steele.