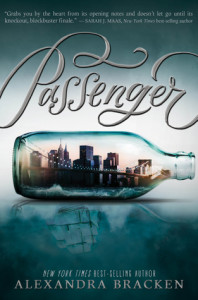 Passage, n.i. A brief section of music composed of a series of notes and flourishes.ii. A journey by water; a voyage.iii. The transition from one place to another, across space and time.

In one devastating night, violin prodigy Etta Spencer loses everything she knows and loves. Thrust into an unfamiliar world by a stranger with a dangerous agenda, Etta is certain of only one thing: she has traveled not just miles but years from home. And she’s inherited a legacy she knows nothing about from a family whose existence she’s never heard of. Until now.

Nicholas Carter is content with his life at sea, free from the Ironwoods—a powerful family in the colonies—and the servitude he’s known at their hands. But with the arrival of an unusual passenger on his ship comes the insistent pull of the past that he can’t escape and the family that won’t let him go so easily. Now the Ironwoods are searching for a stolen object of untold value, one they believe only Etta, Nicholas’ passenger, can find. In order to protect her, he must ensure she brings it back to them— whether she wants to or not.

Together, Etta and Nicholas embark on a perilous journey across centuries and continents, piecing together clues left behind by the traveler who will do anything to keep the object out of the Ironwoods’ grasp. But as they get closer to the truth of their search, and the deadly game the Ironwoods are play­ing, treacherous forces threaten to sep­arate Etta not only from Nicholas but from her path home . . . forever.

We protect ourselves by playing the roles fit for the year we’re in.

Let’s just get this out of the way: I love time travel novels. I’m a huge sucker for them, and I always have been. Had this been released when about ten or fifteen years ago when I was at the age to which this is marketed (god, I’M SO OLD), I would have been all over this and would have given it a thousand and one stars. It still gets a solid rating from me, which comes as a positive thing after reading so many disappointing novels lately.

Etta, on the night of her big violin performance, is transported back in time onto a ship captained by Nicholas, a black pirate of sorts. Obviously there’s a romance brewing between the two, and even though it felt a little forced sometimes, I’m hoping it develops more in the next novel. It wasn’t necessarily an instant romance sort of thing, but the relationship seemed to progress quickly over a span of pages (even if those pages spanned several days). The romance progression felt typical for a YA novel, and that’s completely all right by me!

What I enjoyed most was the commentary on society then and now. Sophia, the other female time traveler whose original time is in the 1920s, says this really amazing thing to Etta about a hundred pages in:

So cling to your rights, your beliefs, your future – but know that none of them will help you here. You haven’t been forced to survive in the same way as the centuries of women who came before you. You know nothing of the impossibly small weapons we must use to carve out knowledge and power.

If I had read that ages ago, I think I would have shifted my thinking much earlier than it did, so I’m really pleased that Bracken is bringing to light the difficulties women have been facing for centuries to a young, modern audience. Not that her audience isn’t aware of it, but I’ve noticed lately in the classes I teach that some of the young women believe that they’ve always had the rights and advantages they have now, and I have to explain to them that within the last thirty or forty years we’ve progressed so much and that we still have so much to work for.

This is a super enjoyable romance-y time travel (with some logic!) novel that’s sure to appeal to fans of Sarah J. Maas, Susan Dennard, and Marissa Meyer.

I received a copy from Netgalley for my honest review.