Hello, Friday! First Lines Friday is a feature on my blog in which I post the first lines from a book I am interested in reading, either a new release or a backlist title! For the next several Fridays, I will be featuring titles I’ve added to my TBR cart! This week’s feature is Amal El-Mohtar’s and Max Gladstone’s This Is How You Lose the Time War published by Saga Press in 2019. 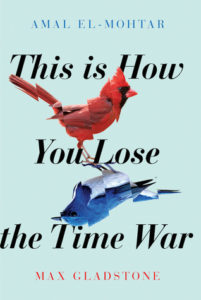 When Red wins, she stands alone.

Blood slicks her hair. She breathes out steam in the last night of this dying world.

That was fun, she thinks, but the thought sours in the framing. It was clean, at least. Climb up time’s threads into the past and make sure no one survives this battle to muddle the futures her Agency’s arranged — the futures in which her Agency rules, in which Red herself is possible. She’s come to knot this strand of history and sear it until it melts.

She holds a corpse that was once a man, her hands gloved in its guts, her fingers clutching its alloy spine. She lets go, and the exoskeleton clatters against rock. Crude technology. Ancient. Bronze to depleted uranium. He never had a chance. That is the point of Red.

I love time travel and I always have, and I’m really excited to see how this novella unfolds. I’ve heard such great things about it!