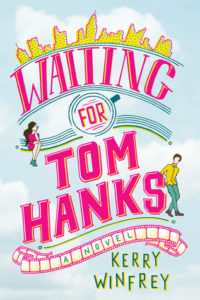 Can a romcom-obssessed romantic finally experience the meet-cute she always dreamed of or will reality never compare to fiction, in this charming debut adult novel from Kerry Winfrey.

Annie is twenty-seven years old, single, and obsessed with romantic comedies (she and her mother watched them religiously, before her mom died). Her dating life is limited by the expectations she’s formed from these movies. She is not as open to new experiences as she might be, because she’s waiting for her Tom Hanks–i.e., a guy she’ll find in the perfect, meet-cute romantic comedy way. When Annie does finally meet her perfect match, it’s not quite in the way she expected, and she’s forced to reckon with the walls she’s built around herself over the years.

“It doesn’t matter how someone in a romantic comedy affords their absurdly nice house, or whether or not their profession makes sense, or if technically they’re sort of stalking someone they heard on a call-in radio show. What matters is that they have hope. Sure, they find love, but it’s not even about love. It’s the hope that you deserve happiness, and that you won’t be sad forever, and that things will get better. It’s hope that life doesn’t always have to be a miserable slog, that you can find someone to love who understands you and accepts you just as you are.”

I’ve been reading a lot of romance this year, and it’s helped a lot through the more stressful and difficult times of this year. It’s light, fluffy, and a perfect escape from reality for a little bit. I do tend to gravitate toward historical romance, but some of the contemporary romances I’ve read this year have been super cute. I really enjoyed Kerry Winfrey’s Waiting For Tom Hanks because it ties in those Nora Ephron romantic movies with someone who has modeled their expectations around the characters Tom Hanks portrays in the romantic movies in which he’s starred.

The story explores Annie’s expectations versus reality and how she comes to terms with meeting her “Tom Hanks” and how he differs from and goes beyond her expectations throughout the course of the story. Drew is the good-looking Hollywood star who has come to film a romantic comedy in the town in which Annie lives, and they have their own movie-perfect meet-cute, but she has self-doubts that Drew actually is interested in her for real reasons rather than whatever she has concocted in her mind. As she and Drew get to know each other and sparks develop, Annie begins to learn more about herself and her past that shatter everything she’s ever known and reveal truths with which she must come to terms and make adjustments in order to grow and be who she needs to be rather than who she wants to be.

I loved the romantic comedy references sprinkled throughout the story, and the cast of characters is so much fun. I loved her friend Chloe, and I can’t wait to read the forthcoming book about her! Annie’s Dungeons & Dragons playing uncle, Don, was such an amazing character to include, and I don’t know if I’ve seen many nerdy characters like these portrayed positively in contemporary fiction like this (though my pool of reference is fairly small, so correct me if I’m wrong), and I hope to see more of him in the upcoming sequel and beyond!

This is a breezy, cute romantic story that I read in two sittings because I couldn’t put it down, so if you like Nora Ephron comedies and contemporary romance in general, definitely look into this one.