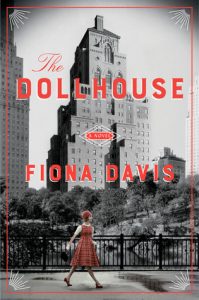 "The Dollhouse. . . . That's what we boys like to call it. . . . The Barbizon Hotel for Women, packed to the rafters with pretty little dolls. Just like you."


Fiona Davis's stunning debut novel pulls readers into the lush world of New York City's glamorous Barbizon Hotel for Women, where a generation of aspiring models, secretaries, and editors lived side-by-side while attempting to claw their way to fairy-tale success in the 1950s, and where a present-day journalist becomes consumed with uncovering a dark secret buried deep within the Barbizon's glitzy past.   When she arrives at the famed Barbizon Hotel in 1952, secretarial school enrollment in hand, Darby McLaughlin is everything her modeling agency hall mates aren't: plain, self-conscious, homesick, and utterly convinced she doesn't belong—a notion the models do nothing to disabuse. Yet when Darby befriends Esme, a Barbizon maid, she's introduced to an entirely new side of New York City: seedy downtown jazz clubs where the music is as addictive as the heroin that's used there, the startling sounds of bebop, and even the possibility of romance.   Over half a century later, the Barbizon's gone condo and most of its long-ago guests are forgotten. But rumors of Darby's involvement in a deadly skirmish with a hotel maid back in 1952 haunt the halls of the building as surely as the melancholy music that floats from the elderly woman's rent-controlled apartment. It's a combination too intoxicating for journalist Rose Lewin, Darby's upstairs neighbor, to resist—not to mention the perfect distraction from her own imploding personal life. Yet as Rose's obsession deepens, the ethics of her investigation become increasingly murky, and neither woman will remain unchanged when the shocking truth is finally revealed.

Fiona Davis’s The Dollhouse explores two women who live in the famous Barbizon hotel in alternating viewpoints from the 1950s to modern day New York City. When Darby McLaughlin arrives at the Barbizon in 1952, she is nothing like the other girls who live on her floor. The other girls model and are gorgeous and compared to them, Darby is plain and soft-spoken. When she meets Esme, a maid at the hotel, Darby becomes involved in a world she’s only heard about and eventually is involved in a deadly accident. Years later when the hotel has been converted into condos, Rose Lewin, after hearing about the accident involving Darby and Esme, sets out to uncover the history and the secrets between the two women to write an article and she ends up discovering so much more.

I really enjoyed this novel. It’s a breezy read that kept me entertained and left me wanting to know how Darby’s story and Rose’s story intermingled with one another. Davis’s writing explores women who are left to the side in society because they “aren’t enough” to the men in their lives, and each of the women discover who they are through the course of the novel and become stronger for it.

One of my favorite parts of the novel is the contrast between what was expected of women in the 1950s versus what is expected of women in the 2010s. I particularly liked the attention to detail in clothing and attire that women were supposed to wear in the 1950s, like the clothing, the gloves and the hats; and I liked the contrast in the restrictions women had in that time, especially at the Barbizon, to today’s current social climate regarding the freedom of women. I thought it realistically portrayed each woman’s struggle in finding the right job, her purpose in life, and even the right partner, and I loved the similarities in those struggles each woman faced contrasting with the differences in society.

This is an excellent read if you enjoy historical fiction about women in their discovery of self, no matter what time in which they live. I’m looking forward to reading more by Fiona Davis!

Thank you to Netgalley and Dutton Books for the review copy!