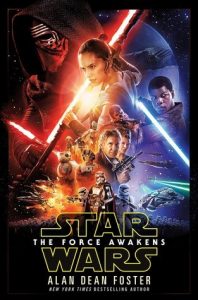 Set years after Return of the Jedi, this stunning action-packed adventure rockets us back into the world of Princess Leia, Han Solo, Chewbacca, C-3PO, R2-D2, and Luke Skywalker, while introducing a host of exciting new characters, including Rey, Finn, BB-8 and Kylo Ren. Darth Vader may have been redeemed and the Emperor vanquished, but peace can be fleeting, and evil does not easily relent. Yet the simple belief in good can still empower ordinary individuals to rise and meet the greatest challenges. So return to that galaxy far, far away, and prepare yourself for what happens when the Force awakens...

Star Wars books are my favorite reads when I want to read something fun and exciting in a universe I’m familiar with, and while I spent a lot of my teenage years reading the Extended Universe, I’ve been interested in a lot of the new stuff that’s come out since Disney got involved with Star Wars and began this new trilogy. I read Star Wars books to add more to my movie-watching experience, and more often than not, the Extended Universe, the new canon, and the movie novels add more depth to the stories unfolding on screen.

However, the novelization of The Force Awakens reads almost exactly like the film, the only differences being the a small handful of additional scenes and the lack of humor and vivacity in other scenes. It’s definitely worth reading to find out a little more backstory on Poe Dameron and how he got to Jakku, as well as a little bit more emotional background for Kylo Ren (but if I’m honest, Kylo Ren is my least favorite character, and I don’t really care one way or another what happens to him). Other than that, it’s an easy read, very much like the film, and I was able to read it in an afternoon!