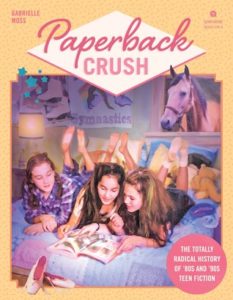 A hilarious and nostalgic trip through the history of paperback pre-teen series of the 80s and 90s.

Every twenty- or thirty-something woman knows these books. The pink covers, the flimsy paper, the zillion volumes in the series that kept you reading for your entire adolescence. Spurred by the commercial success of Sweet Valley High and The Babysitters Club, these were not the serious-issue YA novels of the 1970s, nor were they the blockbuster books of the Harry Potter and Twilight ilk. They were cheap, short, and utterly beloved.

PAPERBACK CRUSH dives in deep to this golden age with affection, history, and a little bit of snark. Readers will discover (and fondly remember) girl-centric series on everything from correspondence (Pen Pals and Dear Diary) to sports (The Pink Parrots, Cheerleaders, and The Gymnasts) to a newspaper at an all-girls Orthodox Jewish middle school (The B.Y. Times) to a literal teen angel (Teen Angels: Heaven Can Wait, where an enterprising guardian angel named Cisco has to earn her wings “by helping the world’s sexist rock star.”) Some were blatant ripoffs of the successful series (looking at you, Sleepover Friends and The Girls of Canby Hall), some were sick-lit tearjerkers à la Love Story (Abby, My Love) and some were just plain perplexing (Uncle Vampire??) But all of them represent that time gone by of girl-power and endless sessions of sustained silent reading.

In six hilarious chapters (Friendship, Love, School, Family, Jobs, Terror, and Tragedy), Bustle Features Editor Gabrielle Moss takes the reader on a nostalgic tour of teen book covers of yore, digging deep into the history of the genre as well as the stories behind the best-known series.

Paperback Crush is such a fun dive into the teen fiction of the 80s and 90s. While I sort of missed the curve with the seemingly endless installments of the Sweet Valley High series and the Babysitters Club, I did read several books from the younger version of the Babysitters Club as well as every single volume in the Star Wars Jedi Apprentice series, the Boxcar Children, and many Goosebumps titles. I love the concept of continuing series for readers, especially when you get involved with the characters and the stories. You as the reader want to continue going on adventures with them and seeing what other high jinks they get into.

I really enjoyed Gabrielle Moss’s dive into the various forms teen fiction took between the 80s and 90s and how it developed. Her dives into the various genres that were popular were interesting, fun, and short. It’s easy to devour this in a single sitting or read each section at a time. My only real quibble with the book is that it ends so abruptly. The rest of it flows like a well-structured essay, but it lacks a conclusion tying everything together and giving a little insight into where these popular series of the 80s and 90s took YA into the 00s and beyond.

And even though I read only a handful of the titles mentioned in the book, Paperback Crush makes me want to go back and revisit some of these series and take a trip down nostalgia lane. If you are an avid reader of any age who loves book history and trips down memory lane, I think this is something you’ll enjoy!

Review copy provided by Netgalley and Quirk Books. All opinions are my own.