Today’s Little List of Reviews features three reads from Netgalley that I’ve had on my Kindle for a long time and have needed to review for a while. Thank you to Netgalley 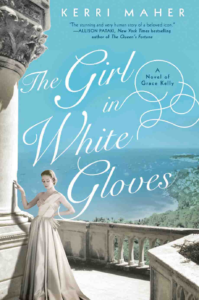 A life in snapshots…
Grace knows what people see. She’s the Cinderella story. An icon of glamor and elegance frozen in dazzling Technicolor. The picture of perfection. The girl in white gloves.
A woman in living color…
But behind the lens, beyond the panoramic views of glistening Mediterranean azure, she knows the truth. The sacrifices it takes for an unappreciated girl from Philadelphia to defy her family and become the reigning queen of the screen. The heartbreaking reasons she trades Hollywood for a crown. The loneliness of being a princess in a fairy tale kingdom that is all too real. Hardest of all for her adoring fans and loyal subjects to comprehend, is the harsh reality that to be the most envied woman in the world does not mean she is the happiest. Starved for affection and purpose, facing a labyrinth of romantic and social expectations with more twists and turns than Monaco’s infamous winding roads, Grace must find her own way to fulfillment. But what she risks--her art, her family, her marriage—she may never get back.

The first half of this was so good, nuanced and detailed with a lot of sparking humor. I love fiction about Hollywood and the behind the scenes glimpses it gives, but this book fell apart halfway through for me. The characterization of Grace Kelly did a complete turnaround and felt unrecognizable from the character introduced to us in the beginning. Tonally, the book felt like a completely separate title halfway through, and it left me a little disappointed. 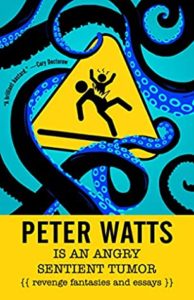 “A brilliant bastard.” —Cory Doctorow“Comfort, of course, is the last thing that Watts wants to give.” —New York Review of Science Fiction
Which of the following is true?
-Peter Watts is banned from the U.S.-Watts almost died from flesh-eating bacteria.-A schizophrenic man living in Watts's backyard almost set his house on fire. -Watts was raised by Baptists who really sucked at giving presents.-Peter Watts said to read this book. Or else.
“Watts, undoubtedly, is a genius.” ―Medium
In more than fifty unpredictable essays and revenge fantasies, Peter Watts — Hugo Award-winning author, former marine biologist, and angry sentient tumor — is the savage dystopian optimist whom you can’t look away from. Even when you probably should.

I didn’t really know anything about Peter Watts before reading this collection of his writing/blog posts, and the resulting collection in an acerbic, entertaining look into a myriad of subjects. It was a lot to take in all at once, so I picked at this over the course of several months. I loved his perspective on a lot of things, so if you like essays about literally anything, definitely take a look at this. 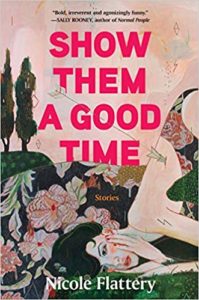 A blisteringly original and wickedly funny collection of stories about the strange worlds that women inhabit and the parts that they must play.
A sense of otherworldly menace is at work in the fiction of Nicole Flattery, but the threats are all too familiar. SHOW THEM A GOOD TIME tells the stories of women slotted away into restrictive roles: the celebrity's girlfriend, the widower's second wife, the lecherous professor's student, the corporate employee. And yet, the genius of Flattery's characters is to blithely demolish the boundaries of these limited and limiting social types with immense complexity and caustic intelligence. Nicole Flattery's women are too ferociously mordant, too painfully funny to remain in their places.
In this fiercely original and blazingly brilliant debut, Flattery likewise deconstructs the conventions of genre to serve up strange realities: In Not the End Yet, Flattery probes the hilarious and wrenching ambivalence of Internet dating as the apocalypse nears; in Sweet Talk, the mysterious disappearance of a number of local women sets the scene for a young girl to confront the dangerous uncertainties of her own sexuality; in this collection's center piece, Abortion, A Love Story, two college students in a dystopian campus reconfigure the perilous stories of their bodies in a fraught academic culture to offer a subversive, alarming, and wickedly funny play that takes over their own offstage lives. And yet, however surreal or richly imagined the setting, Flattery always shows us these strange worlds from startlingly unexpected angles, through an unforgettable cast of brutally honest, darkly hilarious women and girls.
Like the stories of Mary Gaitskill, Miranda July, Lorrie Moore, Joy Williams, and Ottessa Moshfegh, SHOW THEM A GOOD TIME is the work of a profoundly resonant and revelatory literary voice – at once spiky, humane, achingly hilarious-- that is sure to echo through the literary culture for decades to come.

I like reading collections of short stories to break up longer books or when my attention span is fried, so I was happy to read a collection of a new-to-me author. This collection played with the subversion of gender roles and explored the contrasts of women in society. My favorite story of the collection is ‘Show Them a Good Time,’ but the rest began feeling samey and repetitive after a while. This is probably best read one story at a time rather than a few here and there.