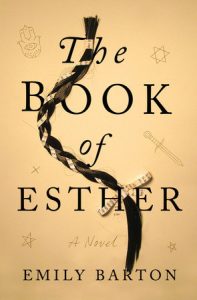 What if an empire of Jewish warriors that really existed in the Middle Ages had never fallen—and was the only thing standing between Hitler and his conquest of Russia?
Eastern Europe, August 1942. The Khazar kaganate, an isolated nation of Turkic warrior Jews, lies between the Pontus Euxinus (the Black Sea) and the Khazar Sea (the Caspian). It also happens to lie between a belligerent nation to the west that the Khazars call Germania—and a city the rest of the world calls Stalingrad.
After years of Jewish refugees streaming across the border from Europa, fleeing the war, Germania launches its siege of Khazaria. Only Esther, the daughter of the nation’s chief policy adviser, sees the ominous implications of Germania's disregard for Jewish lives. Only she realizes that this isn’t just another war but an existential threat. After witnessing the enemy warplanes’ first foray into sovereign Khazar territory, Esther knows she must fight for her country. But as the elder daughter in a traditional home, her urgent question is how.
Before daybreak one fateful morning, she embarks on a perilous journey across the open steppe. She seeks a fabled village of Kabbalists who may hold the key to her destiny: their rumored ability to change her into a man so that she may convince her entire nation to join in the fight for its very existence against an enemy like none Khazaria has ever faced before.The Book of Esther is a profound saga of war, technology, mysticism, power, and faith. This novel—simultaneously a steampunk Joan of Arc and a genre-bending tale of a counterfactual Jewish state by a writer who invents worlds “out of Calvino or Borges” (The New Yorker)—is a stunning achievement. Reminiscent of Michael Chabon’s The Yiddish Policemen’s Union and Philip Roth’s The Plot Against America, The Book of Esther reaffirms Barton’s place as one of her generation’s most gifted storytellers.

I am Esther, and like my namesake before me, I will save the Jewish people.

Emily Barton’s The Book of Esther is an anomaly. Take Joan of Arc, dieselpunk, magical realism, let it simmer with Judaism, and you’ve got a very distilled essence of what this book contains. It doesn’t fit neatly into a genre, and it’s a little chaotic, but it’s worth reading for so many reasons.

The Book of Esther follows the journey of a young Jewish woman named Esther, who takes it upon herself to follow her calling even though she is initially hesitant, even though she faces opposition from her family and her village, and even though she knows her journey will be a difficult one. This novel explores the roles of women in Jewish society, and it shows the strength it takes to overcome the captivity women sometimes face in traditional roles. Barton also challenges the divide of male and female roles in Jewish/traditional society by having Esther go on a journey to transform herself into a male, because she knows that only in a male form will she be accepted and taken seriously by her society. Esther also meets a scholar who has transitioned from female to male by faith in the Hashem (in effort to keep this review as spoiler free as possible, I won’t name names!), and I loved how Barton weaves this into the story and celebrates his identity, especially his identity in his faith. Barton allows Esther to be naive regarding this scholar, and both characters grow and learn about identity and what it means to be oneself through each other. However, Esther learns along the way that no matter what the mystics have whispered, she cannot be anyone but herself. By the end of the novel, instead of encouraging every woman to follow her radical lead, Esther quietly encourages those she meets to be themselves, whoever and whatever they are and choose to be.

There are some things to keep in mind about the novel that might deter or confuse some readers. This novel requires some sort of knowledge of Judaism and Jewish history to fully appreciate because it explores the magical parts of creation and Jewish and Kabbalist mysticism. Having prior knowledge will help in the beginning of the novel when some ideas and concepts are glossed over because it is presumed the reader has prior knowledge. This novel is religious, but it’s not out to convert the reader to a particular belief or reinforce in readers that a particular belief is “correct.” This novel has a love triangle, but it’s not key or essential to Esther’s story.

All in all, The Book of Esther is a must read if you enjoy magical realism infused with a Jewish Joan of Arc, dieselpunk with mechanical horses, and a feminist journey of identity. I enjoyed it immensely, and I still think about it frequently because Esther has inspired me to keep questioning everything because she questions everything. Through that questioning, Esther learns a lot about herself and her identity. She told throughout the entire novel that she can’t do this or that because she’s a girl. Instead of giving up, she follows her heart and does it anyway. And you know what? People listen.

I received a free review copy from Blogging for Books. All opinions are my own. 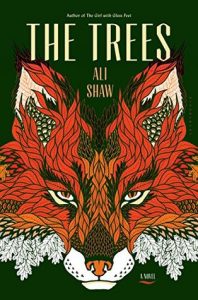 The Trees. They arrived in the night: wrenching through the ground, thundering up into the air, and turning Adrien's suburban street into a shadowy forest. Shocked by the sight but determined to get some answers, he ventures out, passing destroyed buildings, felled power lines, and broken bodies still wrapped in tattered bed linens hanging from branches.
It is soon apparent that no help is coming and that these trees, which seem the work of centuries rather than hours, span far beyond the town. As far, perhaps, as the coast, where across the sea in Ireland, Adrien's wife is away on a business trip and there is no way of knowing whether she is alive or dead.
When Adrien meets Hannah, a woman who, unlike him, believes that the coming of the trees may signal renewal rather than destruction and Seb, her technology-obsessed son, they persuade him to join them. Together, they pack up what remains of the lives they once had and set out on a quest to find Hannah's forester brother and Adrien's wife--and to discover just how deep the forest goes.
Their journey through the trees will take them into unimaginable territory: to a place of terrible beauty and violence, of deadly enemies and unexpected allies, to the dark heart of nature and the darkness--and also the power--inside themselves.

The world ends not with a bang but with a whisper.

Ali Shaw’s The Trees begins when overnight trees shoot up from the ground, destroying life as everyone knew it. I feel like I’ve been reading a lot of post-apocalyptic books lately, but this is the most natural. No one knows where the trees come from. Are they from Mother Nature? Alien? This isn’t a novel about where a destructive force comes from; it’s a novel about how certain people react and survive in the aftermath of something so unexplainable. And the people who survive are not your typical “heroes.”

This is a novel about nature’s cruelty, but also a novel about nature’s grace. The real survivors are the apt ones as they’re the ones fit to adapt. Our “hero” of the story is someone who’s introverted, unsure of himself and his place in the world, and overthinks everything. And who/what he becomes in the end was incredibly magical to me. It’s a reminder that everyone has a place and a purpose, and it doesn’t have to be overt, extroverted, and loud.

It’s a long book, but it’s well-paced and never seems to drag. I almost wish there was more. It’s a blend of post-apocalyptic horror, fairy tales, and magical realism. It’s brutal in a natural way, and if you’re disturbed by descriptions of violence toward people and animals, this book isn’t for you. But if you’re intrigued by a different sort of post-apocalypse in which nature takes back the Earth from its parasitic human population, read this. It’ll give you chills.

Thanks to Netgalley for a review copy!

Eleanor and Esmerelda are identical twins with a secret language all their own, inseparable until a terrible accident claims Esme’s life. Eleanor’s family is left in tatters: her mother retreats inward, seeking comfort in bottles; her father reluctantly abandons ship. Eleanor is forced to grow up more quickly than a child should, and becomes the target of her mother’s growing rage.   Years pass, and Eleanor’s painful reality begins to unravel in strange ways. The first time it happens, she walks through a school doorway, and finds herself in a cornfield, beneath wide blue skies. When she stumbles back into her own world, time has flown by without her. Again and again, against her will, she falls out of her world and into other, stranger ones, leaving behind empty rooms and worried loved ones.    One fateful day, Eleanor leaps from a cliff and is torn from her world altogether. She meets a mysterious stranger, Mea, who reveals to Eleanor the weight of her family’s loss. To save her broken parents, and rescue herself, Eleanor must learn how deep the well of her mother’s grief and her father’s heartbreak truly goes. Esmerelda’s death was not the only tragic loss in her family’s fragmented history, and unless Eleanor can master her strange new abilities, it may not be the last.

Eleanor opens with a woman named Eleanor, trapped in her home life as a mother and desiring to go swim in the ocean. At the end of the prologue, Eleanor, stripped to nakedness, walks into the ocean and never returns. Agnes, her daughter, feels the loss of her mother for the rest of her life. When she has twins, Agnes names one of her daughters Esmeralda while her husband names the second daughter Eleanor. It becomes obvious as the novel progresses that the children each parent names are their individual favorites. The young Eleanor beings to realize this after a horrific accident kills her twin sister. After her parents’ divorce, Eleanor stays with Agnes. Agnes, in her grief, falls into an alcoholic spiral as she cannot handle seeing Eleanor everyday because her surviving daughter is the exact image of Esmeralda and a reminder of her own mother’s death and disappearance.

Eleanor cannot live up to her mother’s expectations, and that knowledge affects her relationship with her mother and her father. As she ages, strange things begin happening to her. Eleanor falls out of time, disappearing into the space beyond time. Sometimes she is gone for seconds or minutes, sometimes she is gone for much longer. When she is in this space beyond (or between??) time, Eleanor meets an entity that we as readers know has been watching Eleanor for a long time. Eleanor is given the option to change everything, a decision with which she struggles but eventually accepts.

I won’t spoil it, but the option of a resent and the whispery, time-free monsters that human language cannot define is so similar atmospherically to Neil Gaiman’s The Ocean at the End of the Lane. If you liked that novel, I totally recommend this one, and if you enjoy magical realism, I wholeheartedly recommend this one. It’s lyrical, magical, and a little bit heartbreaking. It’s a read that will keep you thinking about what happens and what could happen long after you read the final page.