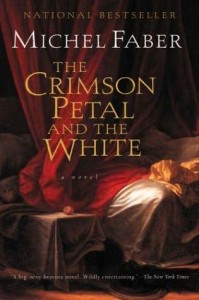 At the heart of this panoramic, multidimensional narrative is the compelling struggle of a young woman to lift her body and soul out of the gutter. Faber leads us back to 1870s London, where Sugar, a nineteen-year-old whore in the brothel of the terrifying Mrs. Castaway, yearns for escape to a better life. Her ascent through the strata of Victorian society offers us intimacy with a host of lovable, maddening, unforgettable characters. They begin with William Rackham, an egotistical perfume magnate whose ambition is fueled by his lust for Sugar, and whose patronage brings her into proximity to his extended family and milieu: his unhinged, childlike wife, Agnes, who manages to overcome her chronic hysteria to make her appearances during “the Season”; his mysteriously hidden-away daughter, Sophie, left to the care of minions; his pious brother, Henry, foiled in his devotional calling by a persistently less-than-chaste love for the Widow Fox, whose efforts on behalf of The Rescue Society lead Henry into ever-more disturbing confrontations with flesh; all this overseen by assorted preening socialites, drunken journalists, untrustworthy servants, vile guttersnipes, and whores of all stripes and persuasions.

Twenty years in its conception, research, and writing, The Crimson Petal and the White is teeming with life, rich in texture and incident, with characters breathtakingly real. In a class by itself, it's a big, juicy, must-read of a novel that will delight, enthrall, provoke, and entertain young and old, male and female.

Agnes lowers the latest issue of The Illustrated London News to her lap, offended and upset. An article has just informed her that the average English woman has 21,917 days to live. Why, oh why must newspapers always be so disagreeable? Have they nothing better to do? The world is going to the dogs.

Michel Faber’s vast expanse of a novel delves into the life of a nineteen year old prostitute named Sugar. And by vast expanse of a novel, I mean it’s a doorstop. I sometimes felt awkward bringing it with me wherever I went because it’s so large. But it’s one of those novels that doesn’t feel large and impossible at all. It’s so engaging and lush that you very nearly believe you’re right there in 19th century London.

I read The Crimson Petal and the White many, many years ago, before I decided to go for my degree in English and before I really knew anything about post-modernism and Victorian literature. When I read it for the first time, I read it for the historical fiction aspect of the novel. Historical fiction, especially fiction set in England, is one of my favorite things to read, so naturally, a huge one that’s vaguely scandalizing was something meant for me.

If you’re unfamiliar with the idea of post-modernism, a very concise way to describe it is that there are many truths to one story, that there are different perceptions and ways to know something, and that life is infinitely more complex than our puny human minds could ever fully comprehend. The University of Pennsylvania (found in a link from Wikipedia), in a course description, suggests that

Postmodernism articulates a world that is culturally one of multiplicity, diversity, contingency, fragmentation and rupture and accepts that we now live in a state of perpetual incompleteness and permanent unresolve.  Postmodernism promotes the notion of radical pluralism, many ways of knowing, and many truths. From a postmodern perspective knowledge is articulated from local perspectives, with all its uncertainties, complexity and paradox. This viewpoint suggests that knowledge is relational and that all reality is woven and rewoven on shared linguistic looms.

It’s one of those -isms that can never fully be explained because of the definition itself, but that’s one I particularly enjoy for a semblance of clarity.

Anyway, not to digress too much, Faber touches on this post-modern viewpoint in the terminology of itself and in the fact that one cannot return to Victorian England, so that viewpoint of that time is through the lenses of our own time. We, as readers, cannot help but interject our own views and perceptions of the world upon this as the author imposes his view of the time on us in tandem. The narrator plays with the reader on several occasions, dropping little bits about the state of women in that time and about authorship itself. Both Sugar and William aspire to be authors, but for William it’s an occupation, but for Sugar the prostitute it’s a means to pass the time with hopeful abandon; and Agnes writes vivid accounts in her diaries, which give major insight into her madness, only to discard them in a frantic act. Other characters speak about authorship, being an author, or even comparing their roles in life to roles in a novel throughout the course of the book.

A conversation between a poor man and Henry, William Rackham’s older brother, offers a quip that’s pretty clearly a dig at famous authors like Charles Dickens and Wilkie Collins:

“You ain’t a norfer, are ye?” he asks.
Henry repeats the strange word to himself silently, straining to divine its meaning.
“I beg your pardon?” he’s obliged to ask.
“Orfer,” repeats the man. “A fellow as writes books about poor men that poor men can’t read.”

Sugar, especially, having spent much of her time reading, compares her new role of governess to roles of governesses she’s explored in the novels she has read (which is a spoiler, my apologies):

Sugar steps back, confused: if she’s so superior in rank to the household servants, where does she get her deep-seated notion that governesses are lowly and despised? From novels, she supposes – but aren’t novels truth dressed up in fancy clothes?

The Crimson Petal and the White offers so much to a variety of readers, and that’s what I’ve enjoyed about it the second time around. My biggest frustration about it is the ending. It’s a bit abrupt, there isn’t much explanation as to why what’s done is done, and in some ways it reads to me as if Faber had to end somewhere otherwise it would continue on and on for ages. He’s apparently published a collection of stories set before and after the novel called The Apple that others have said read like “deleted scenes,” so I think I’ll have to find that in the library for further reading. I’m most desperate to know what happens to Sophie, William and Agnes’ daughter.

There is so much detail to delight in as you read this novel. Faber is a master at weaving those old world ideas and sensibilities with our modern perceptions in this, and you hardly know where one ends and one begins. It’s incredibly enjoyable, and I’m glad it’s my first read of 2016.

And, at the very end (more spoilers, but you’ve already made it this far), we as readers are offered the suggestion that someone we know, perhaps Sugar herself, wrote the novel, giving more rise to the post-modern ideas of authorship:

And to you also: goodbye.

An abrupt parting, I know, but that’s the way it always is, isn’t it?

One thought on “Post-Modern Victoriana; Michel Faber’s The Crimson Petal and the White”